About all I can say is, "Thank God for those annual mammograms."  Because Gator Wife has them, a lump was discovered in one of her breasts.  That was in October.  The person who reads them acted very quickly and ordered a second round, this time including an ultrasound reading.

The suspicion grew and within a day or two a biopsy was performed.  GW got the terrible news that people fear...she had cancer.

Her physician jumped into high gear and within a week GW was talking with a surgeon.  Let me interject here that her visit to the Breast Care Center at the Scarborough location of Maine Medical Center was as good a session as such can be.  My guess would be that such care centers in all Maine hospitals would return similar feelings.

It wasn't a walk in, told what the surgery would be, and leave session.  Indeed, first we met with the surgeon's assistant who took as much time as we needed to explain what was discovered and the choices GW had for resolving the problem.  (You may notice the uses of "we" and "she" here.  I was in on all the discussions, thus the "we."  She was to make all the decisions as it concerned her body, thus the "she.")

The chances for success were explained.  Since her lump had been discovered very early, her chances for complete success were excellent.  But she was also told about the possibility that she was facing a rather difficult situation.  Nothing was held back and the aide stayed with us until all our concerns were addressed.

Naturally, in these situations there can be no guarantees nor were there on that day.

Next to spend time with us was a representative of the American Cancer Society who explained all the ways that organization was prepared to assist us.  Like the aide, that representative spent as much time with us as we needed.  One of the first things I did when we got home that day was send a donation to the American Cancer Society, New England/Maine chapter.

Then the surgeon arrived and bluntly, yet gently, explained what had been found and the surgical options GW had.  The difference between a lumpectomy and a mastectomy was explained.  Treatment following the surgery was completely outlined no matter which decision was made and the seriousness of the cancer that would be removed.

We were told of he importance of testing the lymph nodes to determine if the cancer was spreading.  The surgeon did tell us that all indications were the surgery would be successful and she said she wouldn't/couldn't say that if conditions didn't warrant it.  Gator Daughter, who works at the hospital, said GW's surgeon was well known to be blunt and completely honest and fair when talking with patients.

We looked for success.

The surgery took place last week and yesterday the word came in:  Total success in removing the cancer and the lymph nodes were clear.  As a side note, that was important to me as my brother left us because cancer had gotten into his lymph nodes.

She still has a few weeks of treatment and she'll be watched carefully as the time passes.  But the important part is that the time will continue to pass.  Let me tell you, there is no better Christmas present one can receive than the gift of life.

And for anyone who may have read yesterday's post, yes, we did go out happily for some more Christmas shopping. 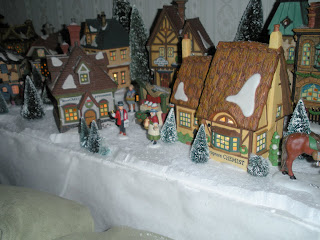 Christmas cheer must be coming out of every door at your house. Our congratulations to GW. Now to move on to a super 2010 for the Gator Clan.
Mrs FF