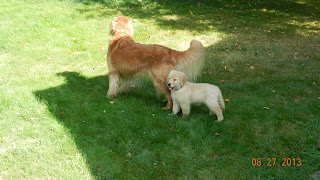 A little contrast here:  The more golden one is our dog Mariah and the little nearly white fluffy one is our daughter's new puppy Brandy.  The puppy wants to be friends with the older one and is used to being around much larger than she and older dogs because she was with her Mom for 11 weeks.  Mariah, on the other hand, tries to tolerate the little one and does a real good job when they are out in the back yard.

It is fun watching the pair chase each other around the yard and that little devil is extremely quick.  I think Mariah here is looking around to find another new place to take Brandy as she introduces the new one to our yard.

On another topic, my  college team, the Florida Gators, won its first game of this season by beating Toledo 24 to 6.  Thanks to ESPN3.com I was able to watch the game.  I was somewhat disappointed in the Gator play.  It was slow, uninspiring, and simply just plain average.  The Gators play Miami next weekend and they're going to have to play a lot better football if they want to remain winners.

More on our daughter's new puppy

A new puppy has entered our lives.  Brandy is 13 week old Golden Retriever that our daughter acquired to fill a void in her life created by the untimely, cancer-related death of her previous dog, also a Golden.  Brandy and her "mom" have visited us for a few moments Monday.  The visits right now are very short although I must say Monday's stay was a little longer than her first trip with her new pup to our home. 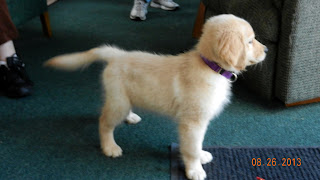 ﻿
Brandy just left her real mom last weekend so she's used to playing around an adult dog.  Unfortunately, our Golden, Mariah, is reaching her 10th birthday and has not been around a puppy since she and her sister, the daughter's departed Golden, were puppies themselves.  Brandy is adjusting to Mariah a whole lot easier than Mariah to Brandy.  This series of pictures will not show the two dogs together, although I missed one shot of the puppy just walking under a standing Mariah.  Once they get used to each other, I'll have some pictures of them together. 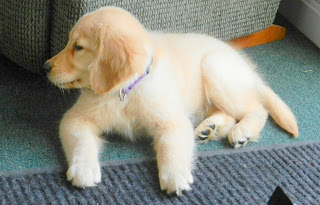 Although Brandy remains mostly puppy white, the signs of her getting her golden coloring shows in her face.  She ran around the yard for several minutes before settling down here.  Unfortunately for me, the sun blanked out my viewing screen on my camera (I'll never get another one without a view finder) and all my attempts to get outside pictures were fruitless. 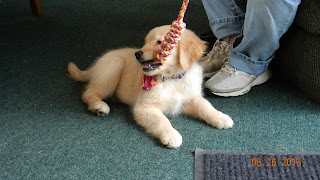 Her toys at our home are limited so far, but she does like to play "tuggy tuggy pull pull. 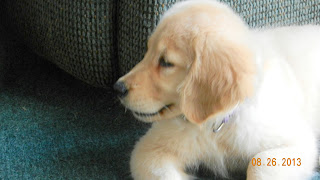 Brandy, and also soon Mariah, will be featured in future posts as I slowly begin to unfade and begin stories about my family, friends, and issues once again.  I hope you'll return and rejoin me.

As we've said for the last month, our daughter's Golden passed away from Cancer nine months ago.  She now has a new puppy which entered her (and our) life on Aug. 24th. 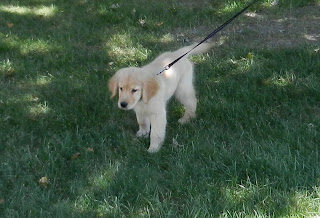 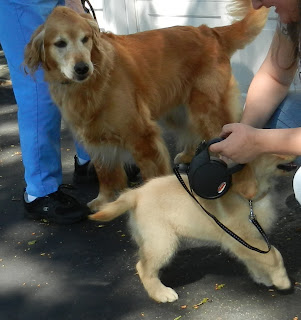 That's our Golden, Mariah, trying to figure out what that little thing is. 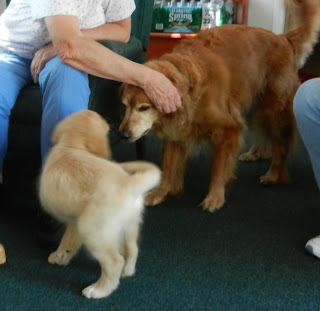 Brandy and Mariah get to know each other.  They both were taken off leash and almost immediately began bonding.  This looks to us like it's going to be a happy experience.  No growls.  No hair up on back of neck.  After leaving this place, simply had the much older Mariah and puppy Brandy continuing to get to know each other.
Dave﻿
Posted by GiM at 12:42 PM