There's a contrast for you.  Last Thursday the temperatures in our area reached a record-breaking 68 degrees.  Saturday night we got a couple or more inches of snow.  Getting up Sunday morning was beautiful, although I'm not sure we're quite ready for snow just yet.

One thing that was nice was the scene outside the window which houses a portion of our village.  The snow covered village square had a backdrop of a snow covered front yard. 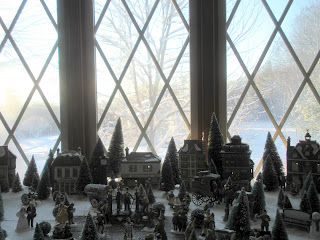 Even Gator Golden was wondering what all that white stuff was. 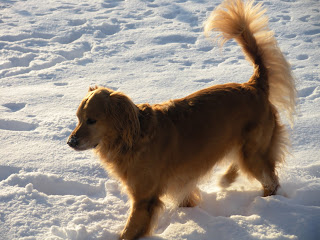 It was a beautiful sight out there Sunday; but once the sun began its work, melting was quick. 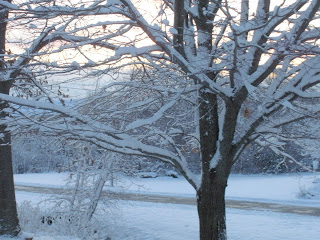 It was a pretty start to the week.  Gator Wife and I are now hoping for a beautiful ending.  She will be having surgery Wednesday so mid week won't be the happiest without a successful trip to the hospital.

Her October mammogram and resulting tests showed what every woman dreads and we're praying it will resolved Wednesday, but it will still be quite a while before the actual results are known.  She'll begin radiation treatment in a couple of weeks.

Don't expect much from the old Gator Dude here this week.