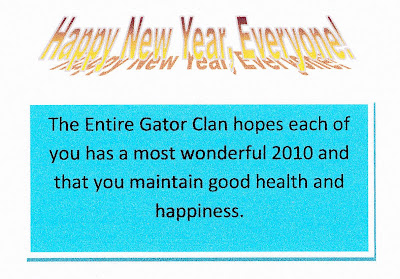 Edited Early Sunday morning for storm information:  I'm not sure if we were once again over-hyped by the weather people or if the Gator Place was just lucky.  Oh, sure, by 6:15 this morning we did have several inches of snow on the ground, but I don't think we got as much as we were told to expect.  My neighbor, who keeps me rather clean, plowed about an hour ago and has headed off to some of his other friends' places.  I can't tell for sure how much is out there as it's still dark and I haven't ventured outside yet, but from the window, it doesn't look like much more than a normal snowfall in Maine.  The television crew does say, however, that some parts of Maine did get a lot more, up to 20 inches I heard in one place.  Perhaps more later.

Edited Mid-Saturday afternoon for storm information: Really not much I can add about my observations of Maine's Big Storm of 2010. I did take the snow blower out to give the driveway and walkway a quick cleaning of snow which has been falling lightly for most of the day. Nevertheless, the buildup on the Gator chunk of Land has been minimal so far. Our house is a quite a way off the beaten path so I can't comment on roads. We'll be back Sunday AM after the "main event" passes through tonight.

Edited Saturday AM for storm information: By 6:00 this morning we did have a little more snow on the ground, but it still isn't what the forecasters had predicted for this weekend. Those forecasters are still saying we're going to get a pretty good slug of snow later today into this evening, but it could be over by tomorrow morning. My neighbor, who has a plow, has made a swipe in my yard which allowed Gator Wife to head off to work with little or no difficulty. Now I'm hoping it holds until she gets home late this morning. If conditions change, we'll have another update later today.

Edited Friday AM for storm information:  At 5:50 this morning, it was still too dark to take any meaningful pictures, but a quick glance outside indicates the Gator Land didn't get enough snow to really make interesting scenes anyway.  I'd say this little spot only got about an inch, but some places in Maine got more, some significantly more.  My Fearless Friend, for example, told me yesterday afternoon his Friendly Spot in a nearby town got about four inches.  If a picture presents itself, I'll post one later.  Today we're only expecting a slushy mix with the major storm coming in tomorrow.