A Busy Time; a major storm

We sure did pick a pip of a day to have to drive to the hospital Wednesday.  Perhaps the worst part will be the cleaning up after the storm.  I won't get much help on this one, except perhaps Gator Daughter will lend a hand.  The trip to the hospital and back isn't a long one for us, but it could be a very interesting one.

Because of Gator Wife's medical procedure, we'll be just a wee bit occupied for a few days; but I thought you might at least like a reasonably new picture of Gator Golden and one of the village.

Edited to update:  GW's medical procedure went, according to her surgeon, extremely well and the doctor has confidence she "got it all."  However, there's always that little "But."  We won't know the complete prognosis until after the test results are returned in a few days.

First, another look at the snow we had over the weekend as GG looks around in absolute wonder.  She loves snow, incidentally, and once we get some snow banks, mainly from my neighbor's plow, a little later in the season, she'll make herself right at home atop the mounds so she can get a good look around her world.  Here I think she's looking for one of those mounds. 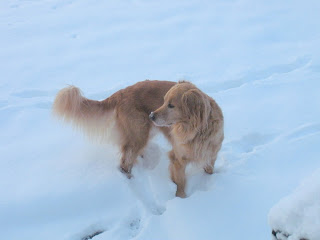 I've shown you pictures of Gator Daughter's mountain/forest presentation.  One of the highlights of her section is a skating pond complete with a bonfire. 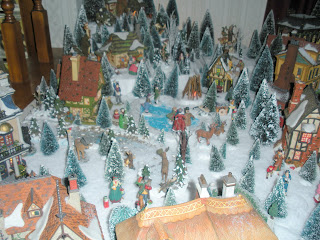 The bonfire is difficult to see in this picture, but it's located just above the heads of the two skaters on the pond.  You may notice a little red light, which is a flickering fire on the actual layout, at the bottom of the logs.

Wishing all the best to GW, and hope that your time in the waiting room with GD is not too long.
Mrs FF