Did you go out last night and help push 2008 away and help 2009 get started? A lot of people did, but not the Gator family. Gator Wife and I have never been the type to go out and party. Our idea of a great New Year’s Eve was to have some friends to our house and have a private welcoming.

Unfortunately for us, we’re the only ones left from those days, and we haven’t renewed the celebration with our new friends. So, we stayed home. I guess we knew those balls would drop at different times, although midnight where they were dropping, throughout the day and night. We also knew that the ball in Times Square would find its way into 2009, too. I saw the first New Year’s fireworks and ball drop on the six AM news yesterday. I did not see the ball drop in New York. 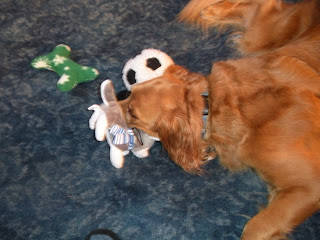 Gator Golden will protect her toys during the New Year. It's hard to believe that a five year old dog still has many toys from five years ago. But to her there's nothing more comforting than being surrounded with soft, cuddly squeakies.
I think I’ve read of some dropping balls in various towns in Maine, too. Many other places have fireworks or a joint “Happy New Year” among people in a town square. Some places in Maine simply let their families go elsewhere to celebrate. I’m not sure what happens in Portland any more. I do believe that great family night celebration in multi venues within walking distance of Monument Square and The Old Port has changed. I don’t know what replaced it.

This will be an interesting year for me. And I’ll be able to see it more clearly. As a result of an eye exam yesterday, I’m getting new glasses. My Fearless Friend will be able to see more clearly in 2009, too. He’s about to get new eyes, at least new lenses to replace a pair obscured by cataracts. My eye doc told me yesterday I’m at least a year and a half away from needing cataract surgery.

That doesn’t mean I won’t get my share of surgical attention, though. I’ll be having an ICD (Implanted Cardiac Defibrillator) placed into my chest in the near future. FF’s and my procedures won’t take place at the same time and neither will require any kind of hospital stay, except I’ll be held overnight. That’s too bad. We could have had some fun telling all sorts of fibs to the hospital staff.

2009 is going to be a fascinating year. We’re about to get a new President of the United States, and an historical event that will be. It’s also going to be interesting to see how he will solve our financial crisis. I don’t believe the current bailout/stimulus package plans will work. Free money never does as President Bush found out last spring. It’ll also be interesting to see how American react when the new President doesn’t succeed, assuming I’m right.

He’s also going to face challenges from all over the world. The world learned very quickly how the United States would react if it were challenged. Because of the swift and powerful response to the 9/11 attack, the world learned that President Bush would strike right back. Those anti-American forces will challenge Barack Obama; and if he blinks, that challenge will quickly become a string of them.

Some say the new Middle East war between Hamas and Israel is already the first salvo that the new President will face.

2009 is now underway. Let’s all hope and pray that it will lead America into a new round of peace and prosperity. May it do the same to you individually, too.

Happy New Year, everyone.
GiM
Posted by GiM at 5:00 AM

Happy New Year to you and all the Gators! May '09 be very, very good to you!

Golly, Sheepish Annie, I hope you have a Happy New Year, too. You have a couple cuties over there that will make it good to you, too.