The weather has done in our veggies!

Another week is drawing to a close. The weather, according to the weather gurus, should be an improvement over the humid weather we’ve had most of this week. One weather person said that summer at last has arrived. We’ve heard that a couple times before this year but that arrival was always very short-lived.

A beautiful weekend, which is the forecast for the coming two days, would be very welcome, even though the Gator Clan will be working during it.

We haven’t had a particularly nice summer. The statistics from the National Weather Service in Gray a couple days ago showed that July was a very wet month, and June wasn’t much better. The July statistics showed that the month was among the top wet ones since the weather service began keeping records.

We didn’t have much sunshine, either. If my memory is working, there were only about nine days during July when it we weren’t wet. Seems to me there was only about 38% of potential sunshine.

Back in the day when we were young and had young children, GW and I rented places on Sebago Lake each summer. We have always wished we could have afforded more than a week, but at lakeside rental prices, we were pushing that week. They were times we’ll never forget and I suspect our kids won’t either.

During those weeks, I only remember one time when we had lousy weather, which was remarkable considering the rental had to be made a year in advance. More than one time this summer we’ve mentioned those weeks as we thought about all the people who had put out probably much more money than we for a brief moment on the lake.

Good vacation weeks have been far and few between this season. There haven’t been a whole lot of good vacations days, either. I know we would have been very unhappy to have put out all that money and then be stuck inside most of the time.

Perhaps for this summer’s visitors, this weekend can make up for some of the bad weather. 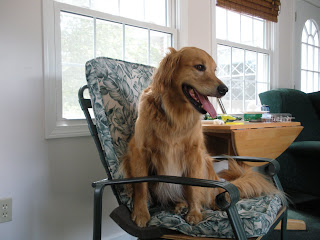 Gator Golden's favorite chair. This is where she naps during
the day. She likes it because it is in the breezeway of our
home. It's a very narrow room and from this chair, GG can
watch the driveway out the front window and what's going
on in the complex behind the house out the rear window.
I mentioned a while back that this would be a working weekend at the Gator homestead. Part of that work won’t include our vegetable gardens.

GW has all but given up any hope we’ll get anything this season except for some green beans and some yellow beans. In fact, we’ve already had some meals which included our own beans. But apparently that’s where it’ll all end.

I probably should known her gardens were in trouble. First to go were her tomatoes. She will have none this year and the plants have already been pulled. She had to put them in plastic bags and put them out with the rubbish. That infection you’ve probably heard about on TV or perhaps read about in the newspaper hit her tomatoes. They fit all the published descriptions. I think this will be the first year we haven’t had our own fresh tomatoes.
I should mention she did not buy her plants in one of those Big Box Stores which drew most of the warnings.

A critter or a family of critters made short work of our beets and beet greens way back at the beginning of summer. The cukes, green peppers, summer squash, spinach, and all the other veggies she and Gator Daughter planted have been the victims of the rainy, sunshineless weather. She hasn’t pulled them yet holding out a little hope. But she’ll tell you we won’t be eating fresh.

We did visit a couple farm markets in our town this week. Their bins and shelves are all but bare, too. I’m thinking this is one year I’m glad I don’t depend on summer crops for a living and really feel sorry for those who do.

I hope you have a great weekend just beginning and can take advantage of perhaps the best one of the year.
GiM
Posted by GiM at 6:00 AM