A return to real journalism??

One thing, I guess, about rain is that it sometimes knocks a front out of the way and brings about lower humidity. That’s sometimes. After a nice but oppressingly humid day yesterday and the wet air we awoke to this morning, I’m not sure my visit to the senior fitness place is going to be very nice. My back has told me it won’t cooperate with my attempts at exercise. 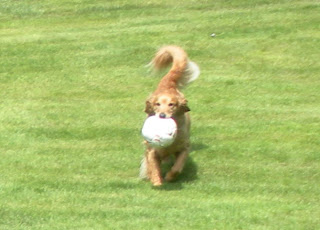 Gator Golden has nothing to do with today's comment,
I just think she's a cute, active almost six year old pup.
I don’t read the Lewiston Sun-Journal very often, but after reading a truly investigative piece in the weekend edition, I just might visit it more often. The story itself doesn’t affect me in any way as it’s a totally Lewiston story, but the investigative part just plain intrigued me. I don’t get to read many such stories very often these days.

Written by regional editor Scott Thistle, the story was about how some members of the Lewiston City Council attempt to influence various city departments well beyond the scope of their Council duties. It’s Thistle’s and the Sun-Journal’s copyrighted story so I won’t give the details here, but if you want to read it, it was available on line on Sunday and you may still be able to read it here.

What I liked about the story was that it was real journalism. The reporter did his homework and, through a court request for the e-mails, put together a piece that will give those Lewiston readers a good look at how the Council perhaps meddles into the working of the government beyond the duties usually established for city councils.

Newspapers have been failing all across the country and even the Portland newspapers were on the verge before they finally were sold. I believe that part of what has led to the problems is the lack of such coverage as provided by the Lewiston paper, pointing out potential problems in government.

We can get the instant news almost instantly through radio, TV, and the Internet. But it is the story behind the news that we’ve sorely lacked for several years. All too often the media has simply accepted the handouts of “news” makers and accepted the words of politicians without ever challenging the “facts” contained within.

After all, reporting the entire story would require some extra work, work that appears to be sorely lacking in today’s news. In order to ask the tough questions and demanding the correct answers, the reporter would first have to have done some work. Would the reporters, for example, accept as fact the word of our elected Congress people if they took the time to actually read the currently proposed health care bill? I guess they figure if the congress folk don’t have to read the bill, they don’t, either.

I remember a while back that several million dollars were missing from one of the state’s major departments. Did our reporters ever do any real investigative reporting to see what happened to that money? If they did, I guess I must have missed it and apologize.

Have our reporters done any investigative reporting on the tax reform passed by the last legislature? I’ve seen many reports on what the elected folks say, but an actual look at the facts and figures to see if they really add up as we’re told has missed my eye.

So it is that solid piece of investigative reporting by Mr. Thistle and the Lewiston Sun-Journal that has raised my hopes that the news media may at last be returning to its mission of keeping government as honest as it can. Until it does, we’ll continue down that awful road we’ve seemed to be riding for the past several years and which has intensified since January.