Educate yourself; and 230 miles per gallon?

Some humidity continues in our weather. I mentioned Tuesday that the weather would affect my ability to perform at my senior fitness session. It did. Although I did most of it, when I stopped I was hurting and limped home. I say “most” because I didn’t add any time or reps to anything. My routine of late has attempted to do that.

I’m not sure what the humidity will do today, but I’ll head over to the session in total optimism.

I didn’t mention President Obama’s health care visit to New Hampshire yesterday. I have read various articles, blogs and forums about the visit. The President was certainly not agreeing with much I’ve written here which leads me to wonder if he has read any of the bills now before Congress or is simply relying on what his advisors tell him.

I’m not going to spend any space contradicting the President this morning; all I will do is ask you to get a copy and read it for yourself. I believe the number is up to five proposed bills and they are available at congressional websites. Don’t listen to me; don’t listen to either opponents or proponents. Form your own opinion with your own honest reading of just what the bills say. Speeches and various interpretations according to one’s political persuasion are easy. Reading the actual words reveals the truths.

Once you’ve started doing that, you might want to consider reading the Constitution carefully. That document isn’t too long. Only then can you decide on whether what is happening in the government today is truly allowed in that founding document.

I am intrigued by House Speaker Pelosi’s and other Democrat leaders’ proclamations that the current protests at various forums are Republican orchestrated un-American mobs. I don’t recall them calling the demonstrations against President Bush orchestrated by Democrats, most notably MoveOn.org and ACORN, as being un-American mobs.

It’s all perspective and that’s why actually reading the documents to form your own opinions is so important.

I think a lot of these thoughts could also apply to Maine’s government. Like on the national scene, we are not being told total truths, truths that can be learned by looking over the documents themselves. 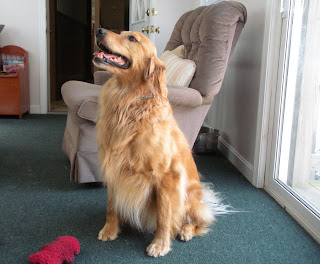 Gator Golden wonders if a treat might be in the offering.
Did you see on the TV or read in the paper yesterday about that new car, the Volt, that General Motors is planning to market next year? According to GM, the car can get 230 miles per gallon of gas. The car is electric which can go 40 miles on a charge and then a small electric engine takes over to add a little charge to the batteries and propel the car.

The car needs to be plugged for charging overnight. I gather that its prime purpose would be to provide commuter transportation as most people could get to and from work on one charge.

That all sounds really great, but the early announcements indicate it will have a 40-thousand dollar price tag. That seems like an awful lot of money for a simple commuter car. I’d think most folks would need at least a second car for real trips.

I’d admit a commuter car would handle my needs now as I rarely drive more than 40 miles in a day. It wouldn’t be a commuter car for me as I’m retired, but getting to the local stores, mall, senior fitness, etc., all would easily fit into 40 miles. Perhaps all that fits into the definition of “commuter.” But, it would be a cold day in that place down below before I’d spend $40K for a car, even one that could take me across the country. That projected cost might be the downfall of the Volt.
GiM
Posted by GiM at 6:00 AM