First, Thursday ended a nearly month-long construction of our seasonal display with the official lighting of our Victorian/Dickens Village. But I think the incredible cold spell we went through during the month was a factor that made it something to remember. The fierce storm we had this past week was also an unusual event around here.

The month saw the historical election of a new President who will take office in January. Our state was one of the few that returned a Senator with an “R” after her name to the U.S. Senate. We told our Legislature and governor that we didn’t want massive new taxes and voted to repeal a law that imposed them on us. We said “No” to more gambling in Maine and also in our community of Scarborough.

A couple of great holidays sparked the month. First was, of course, Nov. 11th. That’s significant for many reasons, not the least of which was the celebration of Gator Wife’s and my 47th wedding anniversary. It was also the day when we say “Thank You” to Americans everywhere for serving their country and keeping us free. Third, it was the beginning of this year’s village work.

Nov. 27th was Thanksgiving Day, the day we give our thanks not only for the good feast we faced and to the good folk who made it all possible by giving us good food but also for the family and friends we’ve had over the years. 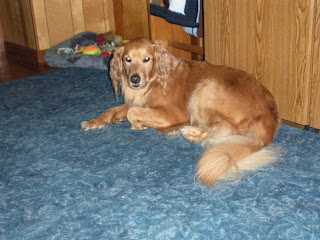 Gator Golden waited patiently right near her toy box Saturday morning. She was keeping a careful watch to see if the old folks 'accidentally' dropped any of their breakfast. They didn't. But GG was ready to try something. Anything.
Now we look forward to Monday as it begins the last month of the year. This month has the makings of being an interesting one for me. The decision process begins during the week on whether I will have a device called ICD, Implanted Cardiac Defibrillator, placed into my chest to control my heart. My cardiologist says I meet the criteria as he sees them, but the final determination will be made by a surgeon who is responsible for working on the heart. That discussion begins later in the week.

We also look forward to one of the greatest days of the year for us Christians.

We have a lot for which to be thankful as this weekend marks the end of one small chapter. I hope you have found November to be a great month, too. Monday will see a new month, and it will have some new thoughts from me.

Nice pix of my friend!

She's a nice subject. Thank you.

That looks like a patient dog. She is ready to be rewarded for such good behavior. Hope that she got a grand breakfast and a treat for being so good.
Keep those pictures coming. We enjoy seeing such a beautiful girl.
Mrs.FF

Thank you. But, unfortunately for her, "People Food" isn't on her menu. She did get a nice Nutra dog breakfast and she got her morning "anti yellow lawn" treat. She's not treated too badly.