The weather people got this one right. We woke up this morning to see that some rain fell overnight here on the south side of Route 1, but other parts of the state got some ice and snow. Actually, it was raining when we went to bed. My Fearless Friend had sent me a message last night that said it was snowing in his little corner on the north side of the Turnpike. I haven’t heard from him yet this morning to see if it lasted, but here the rain has stopped and we’re expecting some sun in a little while.

We didn’t get the white stuff to shovel, or snow blow, or plow; but the Gator family is ready for when it does hit our area. 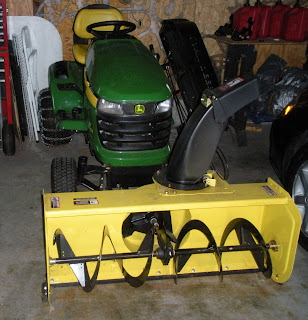 Thanks to my super neighbor who made the changeover for me, my little machine is gassed, oiled, and greased and ready to head out when that first storm comes. That effort, I think, tired my neighbor and his wife considerably. They left shortly after for a vacation at Sugarloaf.

Meanwhile, while neighbor guy changed over the tractor from lawn mower to snow blower, Gator Daughter and Gator Wife cleaned the gutters around the homestead Saturday. The front ones weren’t too bad, but the back side ones were packed with dirt and ice. I think we didn’t clean them last year.

My Fearless Friend said he had his gutters replaced last year, but the new ones are a new sort of gutter system. A series of screens keeps the big stuff out completely but allows very small particles to be trapped until they decompose and drop down into the gutter where rain water takes care of them. FF told me it was a little more expensive than he wanted to spend but well worth it now that he’s gone through a cleaning season. I might have to look into that. 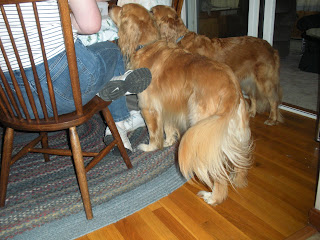 My gals spent yesterday making candy fudge for the season. The two goldens never seem to learn, though. They were in the kitchen and dining area (above) anxiously awaiting something to drop. They don’t get “people food” and especially we wouldn’t give them anything chocolate, so they had a futile wait.

GD and GW continued after lunch and made a pretty good sampling of their candy and fudge. It hasn’t been finished yet, so I don’t have a sample picture. Perhaps after next weekend when they finish the cooking part and assemble the present part, I’ll be able to show you.

The two dogs between periods of hoping against hope for a handout that never came spent quite a long time outdoors, romping, chasing and wrestling. By mid afternoon, GD and her pup had left for the day. 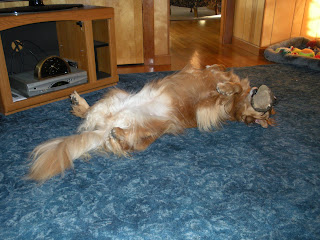 And Gator Golden stuck a toy in her mouth, rolled over in one of her favorite positions, and took a nap.

And so another week begins.