The Weekend After The Ice Storm

The weekend began with fantastic beauty with Nature's massive destruction all around. I always find it amazing just how Nature is able to mix its beauty with its show of power. 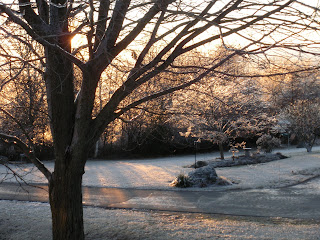 The sun shining through the ice covered trees and bushes greeted us in our little spot of Maine.
K-thunk! K-thunk! K-thunk! That’s what we listened to all Friday afternoon. It wasn’t a pleasant sound, but others in Maine were in a worse predicament. They had no power. Many still didn’t Saturday morning.

The Ice Storm of 2008 came, wreaked havoc throughout the state and left. And now we have the weekend to try to get some of that ice and those downed branches cleaned up. We were lucky in our little Gatorland. The trees around our home were covered with ice and a few of the smaller branches broke free from their trees. But the ground was all they hit.

Both Gator Wife from here and Gator Daughter from her home in Portland made it to their respective work places without incident Friday and then spent Friday morning listening to the reports of more and more branches down, taking power lines with them sending more than two hundred thousand Mainers into wondering 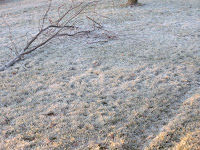 when their power would return.

Some of the results of all that "k-thunking."

The storm had left our part of the state by noontime and by early afternoon the sun had come out. The melting began. All afternoon that “K-thunk!” repeated itself over and over in my yard. At first I thought limbs were hitting the house, but a check outside showed it was only ice dropping off the trees slamming into the ground.
I feel badly for my neighbors all through the state that are spending this weekend on major cleanup and repair chores at their homes. Trees, limbs, power lines all slammed into homes and business in various parts of the state with Southern Maine apparently the hardest hit. Cars were hit along with other pieces of personal and public property. And now the cleanup is well underway.

This weekend is forecast to be a real temperature ride. We’re told Saturday will have rather cold temperatures and they will moderate considerably for Sunday. This was a storm that we’ll be talking about for a while, but it probably didn’t equal the destructive Ice Storm of 1998. It was, however, a big storm for 2008. The news this morning said it was the worst storm in 30 years in some parts of New England. 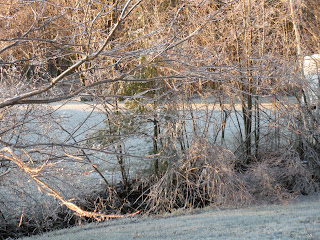 The sun continues its dazzling display in another part of our front yard.

More of our Christmas coming to life is taking place this weekend. Our Christmas tree will be stood in its place of honor and decorated. We already have a foot tall Village Tree that has been lit since we lit the Village a couple weekends ago, but this weekend’s addition is a full size tree for Santa to visit in now less than two weeks.

We hope you have made it safely through the storm and have been able to fight the cold Saturday and milder weather Sunday to get your homes straightened out. And we’ll be here Monday for another visit.