This will be a good day!

When this day ends for me, it will have been a very good one. I’m not planning anything really different for the day nor do I have any super projects to accomplish. What will make this a very good day, however, is it is a substitute day for the regular last-Wednesday-of-the-month feast. We won’t have as much to discuss today as my Fearless Friend will have spent much of the morning here and together we should be able to find solutions to just about anything. And his visit adds to the goodness of the day.

Because next Wednesday is the day before Thanksgiving and most of our retired group that meets each month for lunch and discussion of sports, our former workplace, and even some things political, will be helping our families with the Big Feast that follows the next day, we decided to move our monthly get-together ahead a week. To today.

I suspect some of our conversation will be about Dustin Pedroia’s selection as the American League’s Most Valuable Player. The Red Sox’s second baseman didn’t have an MVP Bonus in his contract, so even though his teammate Kevin Youkilis will get $100K for coming in third in the balloting, Pedroia will be able to put a trophy on his mantle. I’ll bet the Sox won’t be that cold, though, and will give him some extra cash for his contribution this year.

We’ll also probably give our two cents worth of analysis of the Thanksgiving Day football game between Deering and Portland. We all have some connection with at least one of the two schools. I had a daughter attend one and a son, the other, for example. Deering will be the very heavy favorite to win the Turkey Game. 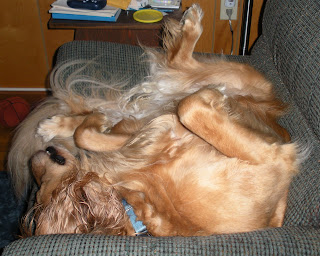 Gator Golden is all excited and can hardly wait for buddy, Fearless Friend, to come.

Along with the Big Feast this noon at a relatively inexpensive establishment, FF and I will have discussed a myriad of items this morning. We both have some personal issues we will in all probability talk about. Well, “issues” is too strong a word. I think “events” would have been a better choice.

I’d bet he’ll try to convince me that parting with a “dear friend” is a good thing. His plow truck, which he affectionately calls Big Red, bit some temporary dust recently. So FF gave the truck to his worthy and mechanically talented son. I think he helped the son get it almost road worthy again during the past few days. But I’m going to miss the tales of Big Red. All he plowed with it was his own driveway, but I’ll bet that truck has more stories of mail boxes than any of the commercial home plowers around. I looked forward after storms to hear the latest.

Those stories have diminished over the last few years, however. FF sans Big Red began spending some of the winter months in Florida. I’ll bet he’s hoping his son will keep his yard clean this year while he’s gone. He usually leaves in early January, but that may be delayed a little this year. Another of his events is looking forward to cataract operations of both eyes. Oh, the fun of getting older. And he’ll really get the feel of that aging shortly after the turn of the year when he climbs into my decade.

The event I’ll bring to the room is also an operation. I’m currently being evaluated for a device to monitor my heart. If it comes to pass, you can bet you’ll be educated on heart disease here on this blog, and at least one device designed to help fight it. We’ll hold off that discussion for a little while until a decision is made.

The conversation during FF’s visit this morning and the continuing great time we, he’s one of the group, have at noontime will certainly contribute to making this a very good Wednesday.