The Village is Lit!

The Gator family will be taking it rather easy today. I think Gator Wife and I are still chock full from yesterday’s feast. The only ones in our family that ate sensibly were Gator Golden and Daughter’s Golden. We won’t be joining the hordes at the shopping places.

But the good news: Village 2008 was officially lit at 2:43 yesterday afternoon. All construction is completed. These pictures aren’t the greatest, as they were hurriedly taken yesterday. I’ll be spending time through the weekend trying for some good representations which I’ll be posting in a slide show on my web site sometime Monday. 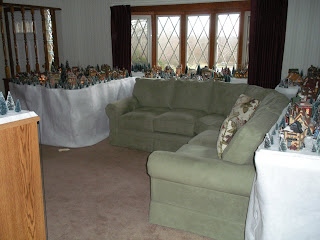 Walking into the living room from the dining area gives a full view of the scope of the Village. 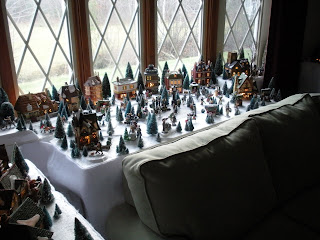 Every piece on the Charles Dickens' A Christmas Carol display represents something from his classic story of Scrooge learning the importance of mankind over personal greed. 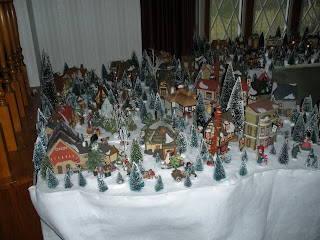 The largest section of the display includes a farm area (lower left), a woods scene (upper left) which includes a skating rink and many forest animals, and a general town scene (right). The woods section is the creation of Gator Daughter.

We create our Village annually to celebrate the Christmas Season. All the pieces, including the "fresh fallen snow" are from the Heritage Collection, specifically the Victorian and Dickens villages, from Department 56(R). The exception is the wooden frame construction and another is the use of the styrofoam.

Construction begins each year on Nov. 11th with the goal of completing during the weekend after Thanksgiving. This year we were just a couple of days ahead of schedule.

Does the completion of the village now give you and your family the title of MAYOR & MRS. GATOR ?
Nice work. It looks beautiful, and will be a wonderful sight for this entire season. Congratulations on the early finish. I know that means this was not a government job,you finished too early, and probably under budget.
Mrs. FF

Thank you. It sure does look a lot better up close and personal. My little camera doesn't do it justice.

I'll take that into consideration. Perhaps she'll make it one day next week.