Another weekend is behind us, and this past one was a busy one. We began putting together Village 2008, the combination Victorian and Dickens Department 56® village pieces. We had planned to use the weekend to clean up the yard of leaves and things, but a quarter inch of rain Saturday and Saturday night made it too damp outside. The tractor bagger doesn’t like damp. So, we moved the beginning of construction up a couple of days.

Gator Daughter and her dog came over both days to help us. Since we effectively had two days to do the work we normally would do in one, we didn’t hurry. But we ran into a glitch. All the Styrofoam we use to give the base a look of being snow-covered, didn’t want to fit this year. Last year we did a lot of improvising from old stuff and, of course, didn’t mark them.

After we finally said, “Stop. Let’s do this thing correctly,” the flow began. We first had to cut all new pieces of base. We added a mountain this year so it had to be cut and formed. By the end of Saturday, all that was completed. It’s kind of crowded in that two foot space between the wall and the couch so getting all the lights into place was a major chore. GD crawled through the space to plug them all in.

We added the structures to be lit and called it quits for the day. I did point my camera at the progress and took pictures of the Styrofoam base, the mountain, the lights peeking through the base, and some structures in place. The flash went off and the picture I took appeared on the screen on the back of the camera. When I went to transfer them to the computer so I could pick out a couple to show you the progress, there were none in the camera. I have zero idea what happened to them, but this rather inexpensive camera has been giving me trouble for a few months.

I did go back this morning for another attempt at pictures and got some of questionable value, but here are a couple of them. At least you can see the base and some of the structures in the left picture. 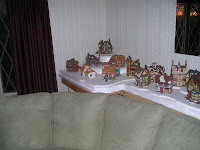 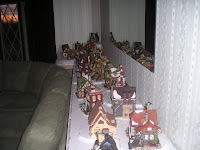 The one on the right is the work-still-in-progress mountain. We’re heading to the craft store today to get some materials for a potential solution to the sharpness. After the other three parts of the village are at this stage, we’ll add supporting accessories such as people, merchants, carts, trees and snow. That all takes place on the final weekend of construction.

Tomorrow is Veteran’s Day and we’re hoping the leaves will be dry enough to get collected. That is how we’re planning to spend our day. In the evening, GD is planning to take us out to dinner for a special celebration.

The village will be on schedule, thanks to the weekend work, and next weekend we’ll be putting together the window section, the most popular display we develop. It depicts A Christmas Carol by Charles Dickens. Next Monday, I’ll give you a preview of that portion of the display. That, of course, is conditional on the workings of my errant camera.