I don’t think I like the cold, especially this much a week before Thanksgiving. It was just too darn cold this morning when I headed out for my Thursday Senior Fitness session. I thought yesterday was cold when I headed to the restaurant for the monthly lunch session of our special group of retired people.

Yesterday’s outing began shortly after 11, today’s, 7 AM. It was definitely colder this morning. By the time I got to the therapy center, that cold had gone through my body. Regular readers of this know how my bones and joints react. It slowed me down a little today, but I forged ahead and completed my routine.

But that’s not what this is all about. It’s about yesterday.

My Fearless Friend did come over and we talked almost according to my script in yesterday’s post. It was, he pointed out to me at the lunch, the first time we had gotten together in either of our memories without hashing over politics or solving some computer problem. It was almost entirely about his giving his prized, very old pickup truck to his son, his impending cataract operation, and my evaluation for a heart device.

It was at lunch that the embarrassing moment happened. Last evening, I got an email from FF:

I am expecting some blog fodder with respect to the disappearing desert for tomorrow’s blog. I thought that --- was going to wet his pants with your reaction to the missing ice cream. I was entertaining (Mrs. FF) about the discussion of the day and she was most amused.

We had completed the main part of the meal and, after several minutes of conversation, we decided it was time for dessert. I went to the ice cream machine and made myself a nice sundae with strawberry sauce. I took it to the empty table and placed it at my seat and then headed to another section for a spoon which I had forgotten. One can eat a dish of ice cream easier with a spoon.

By the time I got back, all the others had arrived and were enjoying their respective desserts. I think there was a conspiracy because they all had ice cream with syrup on it. Mine was gone. Disappeared into thin air. I “knew” I was being the butt of some horseplay, but my cup of ice cream never showed up. FF offered to go get me another one, but a combination of embarrassing stubbornness and an honest knowledge I didn’t need the ice cream caused me to decline the invitation. The reaction FF wrote about must have been eye opening.

Two of our group are ushers at Seadogs’ games. Some changes are in the works for them and that prompted a funny exchange. FF continued:

I was entertaining (Mrs. FF) about the discussion of the day and she was most amused. She also had an interesting comment when I told her the story of the numbers that were assigned to the ushers at the ballpark and some of the ushers being upset that -- had number 1 and some others thought that --’s 32 was unfair. Her comment was if an ex-principal was running the place that he probably would just assign every one number 1 next year and keep everybody happy. (She’s a retired teacher.) Her thinking was that a principal would be more likely to come up with that kind of an answer to a non-problem. Or fix something that isn’t broken!

She also asked if I passed on the request for more pictures of the dog. I assured her that I did. (She also thought that I should be more proactive in finding the missing desert. She didn’t really approve my asking if you wanted another cup and you saying NO!) Oh well, I think that is the only thing that I have done wrong today in her eyes.

That missing dessert was exactly where I had put it when I had returned to the table the first time. I apparently was confused by the tables and simply put it on the wrong one. As we were leaving, we spotted the ice cream sitting patiently, hiding behind a ketchup bottle, on the next table. That, of course, didn’t cause any more frivolity at my expense. Sure! I’ll blame it on my age. 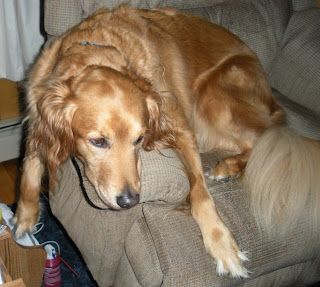 Golden Gator was in "mommy's" chair yesterday. Today she found "dad's" chair. If it's empty in the den, it's hers. She doesn't ever get on the furniture in the living room.

And, Mrs. FF, I’ll gladly get some more pictures of Gator Golden. It’ll be awhile, though, before I’ll be able to catch her beautiful smile.

Now that's what I am talking about!! She is one beautiful animal, even if she does get excited and water FF shoe at times.She looks like she might like one of those chairs for herself.
Mrs. FF