Why the hurry on Health Care Reform?

Once that rain got out of the way Saturday and the sun began to show through the clouds by mid afternoon and beautiful sun with low humidity yesterday, we had a pretty good but busy weekend. Most of it was spent in our cellar doing some more cleaning. Once all the big junk stuff had been taken away, we found boxes and boxes of other things. What we’ve learned is deciding to eliminate almost a half century of what has become junk is a lot more work than we figured. And it isn’t over.

Gator Daughter and her dog were here Sunday. Among the accomplishments completed by her and Gator Wife was the planting of the second crop of green and yellow beans. The first crop is now showing beans and we should be eating our own fresh beans possibly as soon as next weekend, if the weather cooperates. 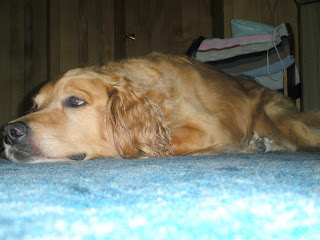 I think Gator Golden knows she's just being used for a transition.

Health care continues to be at the top of the news. Although President Obama’s plan to reform the health care industry isn’t zooming through Congress right now, he insists the Democrats will give him his new way to provide health care by Congress’s August recess.

Speaking with Jon McDonald on WGAN’s weekend show, Rep. Chellie Pingree seemed to be saying that regular folks don’t have to read and understand the health care bill. We folks should just “trust” our representatives to provide a good plan. She seemed to say she favors passage before the recess before members of Congress can get back home and talk with and listen to their constituents. I believe she thinks such discussions will lead to plan failure.

If my understanding is correct, then getting back home to have discussions with constituents is exactly why the measure should be delayed. Once we commoners get a chance to understand that bill, those Congress people will all of a sudden remember they face elections in November. At least some of them will. And that “some” includes First District Representative Chellie Pingree as will all other members of the House of Representatives. Neither of our two senators is up for election this year, but one-third of the Senate is.

My suspicion is that Rep. Pingree doesn’t want to have to face the voters with the worst health care bill that can be imagined.

For starters, it will put this country over a trillion dollars more in debt, debt that your children, grandchildren, and great-grandchildren will face, if the country is still around. Has anyone considered just what would happen if China called in all the trillions of dollars in loans it has made to us? For starters, we just can’t afford this health plan.

Everyone will be required to buy health insurance, either a private plan which probably won’t be available to us, or a government plan which is what the Pingree bunch want us to buy. Anyone want to bet our Congress people will give up their government plan and join us peons standing in line for treatment while a bureaucrat decides if we should get care or not?

What do you mean? Private plans may not be available? The president says we can keep our present insurance if we want. The answer is a paragraph in the new proposed law that says after it becomes in force, private companies can’t write any new policies under existing plans. They will have to have “qualified” plans like the government one. If the companies can’t write new policies to share the cost of care, how long do you think they will continue to honor them?

Almost immediately the new plan would cut payments to hospitals, doctors, clinics, specialists, and all other care providers. We will soon face the lack of facilities and providers as they go out of business, as has happened in all other countries that have gone to socialized medicine.

I have a friend who is now an American citizen but originated in Canada where most of his family remains. I wish I could relay the horror stories he tells me about the very long wait for care and the very long trips for such things as MRI’s, ctscans, mammograms, and the like.

Furthermore, the decision on treatment, even life itself, will be out of the hands of you and your physician. My daughter, who works in a hospital, pointed out to me just yesterday afternoon that if this new plan were in effect in 2001 when I went through a series of events, I would have been denied treatment so nature could take its course. I’d be dead today.

We already have full medical coverage for anyone who needs care in America. By law, most hospitals, for example, must give treatment to anyone who goes to the emergency room whether they can pay or not. I’ll grant that some of the niceties and conveniences aren’t included, but if you’re sick, you can get help.

There is so much more and so little space to include it. You can bet I’ll be back to this topic. Meanwhile, consider that Rep. Pingree is among the Democrats that want this plan passed before, that’s BEFORE, you get a chance to learn about it and how dangerous, costly, and poor it is. That, my friends, is why the Democrat leadership and the President need it passed before the truth comes out.
GiM
Posted by GiM at 6:00 AM