A nicer day is upon us

We’re supposed to have a little nicer day today. But we sure did get a bunch of rain over the last 48 hours or so. My rain gauge recorded 3.11 inches this morning. I would like the sun to get out early and get my yard dried so it can be mowed this afternoon. It had gone several days before I got a chance to mow…hay it might be more appropriate…last weekend. But once again in the rapid growing season, it needs cutting.

Today, of course, is senior fitness day for me as I head out for a physical therapy center in South Portland that offers a special plan for their former senior patients. I had undergone some strenuous physical therapy about two years ago attempting to get my back working. Medicare doesn’t pay for extensive PT so I had to stop that program. Fortunately for me, the owner of the place has a special plan for seniors who have started there.

Tuesday was a tough day for me, and it was due to my goof, not the weather. One of my activities is a ride on the stationary bike. I forgot to put the seat up to my height and did the first five minutes or so with it set for a five footer. There was a time I thought it was for a two footer, but I don’t think a child that size could ride the thing.

After those five minutes, that chunk of steel in my hip began to hurt big time. I finally realized my error and raised the seat, but by then it was too late. I thought I’d have to quit the bike that day after about 8 to 10 minutes, but I fought through the pain for my full stint. I paid for it the rest of the day, though.

I’ll be sure to make that height change this morning. Perhaps if Lisa, the youngster primarily assigned to watch out for us, had been there, she would have noticed my goof earlier. But she was off on another assignment. She’s expected back today. 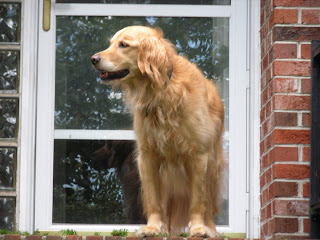 Gator Golden, who has been rather soggy for a couple of days, seems to be thinking today is looking a little better.
Just yesterday I mentioned that several petition drives were gathering signatures to get several new laws passed by the state’s Legislature repealed. Yesterday afternoon we learned that one of those drives is coming to a successful conclusion.

WCSH6 NewsCenter reported yesterday that the organizers of a people’s veto petition drive opposing Maine’s new gay marriage law say they have gathered more than the 55-thousand signatures needed to ensure that Maine voters will have a ballot question in November’s elections asking Mainers if they approve people of the same sex joining in marriage. It only took them four weeks.

Although same sex marriage laws are in effect in several states, no state has passed such a law when it went to referendum. Other states have had the law put into force through court action. In states where such a law had been approved by government action, citizens have successfully repealed it.

Petitioners are continuing to gather signatures on a people’s veto attempt to overturn a so-called tax reform which purports to lower taxes by changing the income tax rates and method of determining the tax. Most people don’t understand that law raises taxes on sales, services, and some entertainment. It also raises food and lodging taxes.

One person in the know indicated the other day that the signature drive is going well, but I haven’t seen any definitive indication that it is.