A day of dog sitting

The rain was coming down this morning when Gator Wife and I began our day. Perhaps it will be a little more peaceful than it was yesterday.

You see, we dog sat yesterday. It wasn’t a difficult task as Gator Daughter’s Golden Retriever feels safe and at home here because she’s been here so often. She knows us and she knows her sister, our Golden, very well, too. But having the two dogs around all day was a little tiring for us older members of the Gator clan.

We knew the day was coming, or at least we had assumed the day was coming. The roof on GD’s house has been raining little black beads of stuff lately. Records show the roof was last replaced about 35 years ago so it simply had run its life’s course. She got bids from two or three very reputable companies and chose one to put a new roof on her house.

A date for the second week in August was agreed upon, but the roofer called her Wednesday and explained he had a cancellation and wondered if he could start yesterday. GD’s dog is usually left alone at home all day while our daughter goes off to work. She didn’t want to leave the dog alone at home while strangers were climbing around the house and pounding on the roof, so she asked if we’d dog sit. There was, of course, no hesitation. 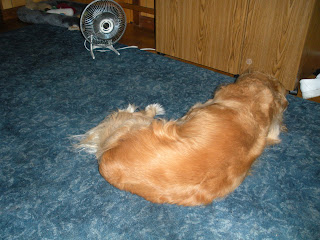 I really tried to get some cute pictures of the pups playing, but each
time I showed up with the camera, they went separate ways.
After one hot romp outside, GD's Golden found a good napping place
and she curled up in front of the fan.
The dogs were excellent and we have no complaints. But dogs are dogs. Both of these have been trained to stay within our Invisible Fence area so letting them out was without worry. But one dog wasn’t used to being in a different house when her ‘mommy’ wasn’t there so she wasn’t too happy being outside too long.

To make matters even more interesting, we had a workman here for some minor repair work on our gutters. While he was here, the dogs remained inside, but naturally they needed to keep reminding us there was a stranger outside. Window to window, barking all the while, even the workman was chuckling. I’m not sure we were, though. 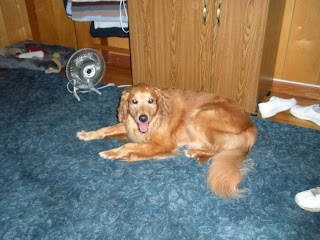 After her nap, the visiting pup abandoned her cool, comfy spot
and Gator Golden took a turn cooling off in front of the fan.
When he left, the dogs settled down and spent a goodly part of the afternoon sleeping. Of course if either GW or I moved, both dogs immediately awoke to join us. It was an interesting day to say the least.

Because of the then impending rain, the roofers made sure our daughter’s home was secure and tight and arranged to return, possible to finish the job, tomorrow. That won’t be a problem for GD and her dog as they had been planning on coming over here anyway. This time, however, her dog will be with her favorite person with her.

And that’s the tale of a noisy, fun-filled Thursday on the old Gator homestead.
GiM
Posted by GiM at 6:00 AM