No village today, but a preview of your future health care

We haven't worked on the Village since the weekend so have nothing new to show you or even just tell you about. Our attention has been focused elsewhere as we mentioned in the last post. The Old Gator Dude, however, is thinking about you and thought we'd make a little change in this week's post. 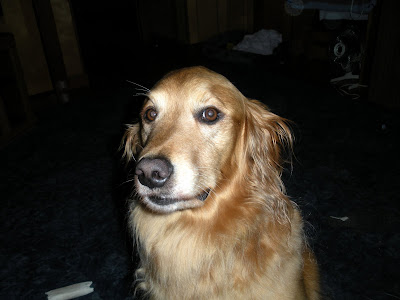 Nothing special here; Gator Golden just likes to be included.

Wednesday was the Fourth Wednesday of the month for my group of fellow retirees who meets regularly meet on that Wednesday for lunch. Yea. I know there's still another Wednesday in November, but it's the day before Thanksgiving and each year we avoid that week considering all the things going on and the big family meals begin planned for the next day. So we normally move the November session to the third week.

I think we're all surprised each year when the full complement of regulars shows up. Actually, only one person wasn't there this week, except for those who've gone to Florida, and he usually only comes occasionally. As always the group had a good lunch and it was full of great conversation.

We also do not meet in December because the last Wednesday is always between the two busy days of Christmas and New Years so we take December off. We'll be back together for the last Wednesday in January. Unfortunately, we will be without one person as he will have made his trip to Florida for the Winter.

I hope all of you are following the debate over the recommended changes in mammogram recommendations for women. The group of physicians which did not include oncologists or other cancer specialists and apparently in support of the Obama health care reform, changed long-standing recommendations that women begin annual mammogram testing at age 40 to beginning them at age 50. The group also recommended the tests be every two years instead of annually.

It is my understanding that there was no peer review of the recommendations. Medicare, the government health care reformists, and insurance companies will jump all over the recommendations. Why? Simply because of the theme repeated often throughout the news interviews of the doctor in charge. They will save money.

We, like those other countries, will have care rationing and the government will control the waiting lists for care. Yes. Rationing and waiting lists. They are already a part of HR3200, the U.S. House passed health care reform bill.

Is this what you really want?

We have been told the best way to rid one's cancer is early detection and early treatment. A person near and dear to me was recently diagnosed with breast cancer and it was found as a result of her annual mammogram. Because of early detection, her prognosis is excellent. I'd hate to think of what could happen if she had to wait another year for that test.

It's also interesting that none of the groups involved with cancer care, prevention, or education has endorsed the recommendations. I'm urging all of you to carefully consider what will happen to our health care if the government does take it over.