As we do annually, we began the actual Christmas Village construction Wednesday. 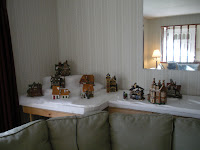 We had spent some time last weekend putting up the frame that holds one section of the Village. The placement of the structures was begun on our traditional annual beginning day, Nov. 11th. (You can see some pictures of the frame in Wednesday's post.) To the right here is the beginning one of two mountains areas we'll have this year. Remember, this is just the earliest placing of some structures. 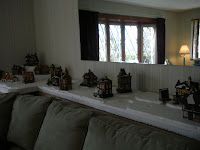 Another view of the early placing is on the left. As you can see, only a few of many pieces have been placed. You may notice little ridges in the styrofoam which we use as a base to contour the area to give the overall affect of some depth. The blank spots will eventually have more structures. We'll also be adding accessories to create a "village feeling." 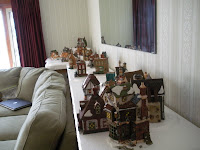 Before we begin the lighting process, we put all the pieces in the section generally where we expect them to be, although we do quite often make many changes before the final layout is completed. On the left is a look at more of the structures along the full length of village portion behind a section of the living room couch. 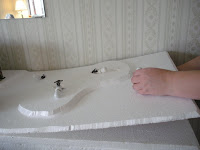 On the right are the hands of Gator Daughter as she gives us a hand by putting the lights in place. These are the lights that allows us to give the night time look of a village all lit up. You'll notice we have at least two layers of styrofoam on the base which allows us to create channels for the wires and still keep the wiring invisible when guests come to view the village. 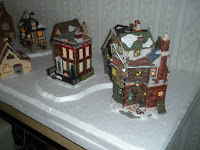 It's a little hard to see them lit on the left here, but you can get an idea of what a Department 56 (C) Lit Villlage looks like. As I've said, all the pieces we use are from the Victorian/Dickens collections. We'll add accessories this coming weekend and begin another section, the depiction of Charles Dickens' A Christmas Carol. When all four sections are completed Thanksgiving Weekend, we'll add trees and snow and officially light the Village.
GiM
Posted by GiM at 6:00 AM