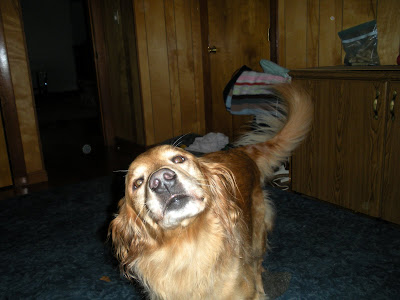 "Why are you so angry, Dad? Is it something I've done?"
No, GG. You're a good girl. It's proposed health care reform.
I am extremely angry at an organization to which I foolishly belong today. It is the AARP, the American Association of Retired People. I read yesterday and heard on the radio that the organization has endorsed the House Democrats health care reform bill. I cannot believe that anyone in the organization has read or even perused the legislation itself. As I pointed out one day last week, I have read it, or most of it at least, and it is the worst possible health care bill we can imagine.

The increase in taxes alone to pay for this disaster should be enough to make everyone fight against it. For us seniors, it will lead to what Sarah Palin warned, death panels. Long waiting lists for care are required to be created for whatever the government deems necessary so that the government can have enough money to pay.

People who do not buy the mandatory insurance will be fined and I read earlier this week, the government anticipates it will get more than a billion dollars in fines.

Medicare will receive cuts into the billions of dollars which will completely adversely affect the quality of care for seniors.

I can’t possibly review all the disastrous effects this health care bill will put upon not only seniors but all Americans. As one pundit wrote earlier this week, the bill contains every bad idea for health reform that has been proposed by both Democrats and Republicans for the past ten years.

And the AARP, that group that purports to fight for retired people, is supporting the end of medical care for those retired people. I can’t help but wonder just how much money they have received from ACORN, the SEIU (government labor union), the Democratic Party, and others for this support. By this endorsement, the AARP certainly demonstrates to retired people that it is not their friend.

You can read what I said last Friday about the proposed health reform here.

You really should read the actual bill so you’ll know exactly where I stand and why. It is available here, or at least was yesterday. Warning: It isn’t easy reading which is why very few people, including most Congress people, won’t ever actually read it. The AARP site directs you to a couple of resources where it says you can learn about the reform package. I haven’t checked them out, but I’d bet they don’t reflect what the actual bill says.