Thank you to both veterans and those still serving from the Gator Clan.

The Gator Clan also celebrates its beginnings 48 years ago as we begin our 49th. It was on Nov. 11, 1961, that Gator Wife and I became one. Wow, I’ve enjoyed about two-thirds of my life with my wonderful bride. Trust me; she’s had to endure a whole lot more than I as we embark on #49. Happy Anniversary, Gator Wife. 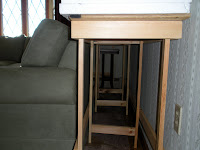 It’s also the day we begin formal construction of our annual Christmas Village which takes up a good portion of our living room between Nov. 11th and shortly after the New Year. This year we got a little head start this past weekend when we brought the table frames and coverings into the room. One frame has been put together, and Gator Wife has also begun bringing some of the collectables out of storage.

Our village consists of lighted pieces we’ve collected over the years from Department 56 © collectables. The Village primarily consisted of Victorian houses and business with a few from Charles Dickens’ A Christmas Carol. We have 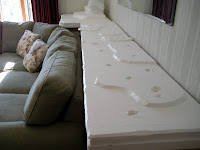 noticed a subtle change in the naming of the offered displays so that most of the Victorian Collection now contains the Dickens’ Village designation.

Department 56 © also has other organized villages, such as a New England presentation, a Santa one, and several others. We have remained loyal to the one we use and our collections includes more than 250 houses, businesses, people, accessories, that bring Victorian England to life. We also keep our collection intact and put all the pieces into their original boxes for storage. 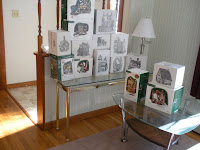 optimal presentation a few years back when it literally consumed 75% of our living room and extended into the dining room. We now only have it along one wall, in the bay window, and a short section of another wall.

Only one section remains relatively unchanged from year to year, and that is a section dedicated entirely to Dickens’ A Christmas Carol. Every piece in it represents a scene from the popular Christmas story that depicts the change from the piker Scrooge to his becoming a generous old man. Even the ghosts are included.

In case you’re wondering, we do not use the living roo 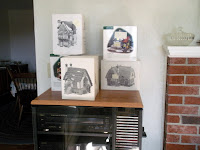 m for living per se. It is reserved for when we have guests. Our TV resides in a room of its own so we don’t have much reason to use the living room.

And so our season has begun. We have a lot of work to do between now and our scheduled “Lighting of the Village” during the Thanksgiving weekend, but we’ve always managed to stay on schedule. I’ll have village updates and pictures as we go along and a picture roundup when it’s finished.

Congratulations to you and your better half on this your Anniversary Day. Today reaching such a milestone can be greeted with loud cheers and very loud praise, not many make it to that level of togetherness.
Looking forward to seeing the progress on the village scene as the days roll by.
Mrs.FF

We thank you, Mrs. FF. I think I have some friends that are leading the way by just a couple of months.