The weekend turned out just about as we had wanted it.  A little rain, actually shower activity, hit the Gator Homestead Sunday so not all of the stuff on the events list was accomplished, but I think just about all was.  Now the weather was forecast to take a little turn for the worse for a couple of day, with most showers but some possibly heavy rain Monday.

Sunshine and mugginess could return by mid week.

The veggie gardens haven't been mentioned lately, and, as they say, no news is good news.  All the vegetables that Gator Wife and Gator Daughter planted earlier in the spring are doing extremely nicely, a far cry from the disastrous summer of a year ago.  The Gator ladies put the second planting into the ground over the weekend so now we should be getting fresh veggies soon into late summer.  Some of the food they planted earlier is just moment away from being ready for this year.
To me the most important accomplishment this past weekend was the trimming of the green bushes in front of our house.  I have no idea what they are except they're green year round.  GW could easily tell you what they are and she's told me dozens, yea, hundreds, of times.  Still, to me they're just green bushes. 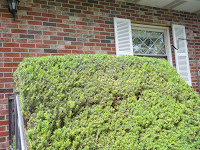 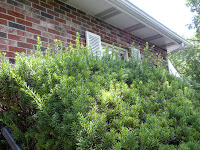 We have one bush to the right of our front steps when one is facing the house.  I think it was the most scraggly of them all.  GD, who had never held a hedge trimmer until we bought our current house and only then because I had become incapacitated for a summer a fews years ago.  She has become quite proficient with it and now trims the bushes about this time of year and again in the fall of each year.
When she finished, the picture on the right above shows a dramatic improvement.
On the other side of the front entrance are five green bushes, one of which is the mate to the one on the right.  They, too, were extremely scraggly.  GD found getting those bushes into presentable shape was very difficult as the space between them is scarce.  She needs to work her way into the spaces in order to reach the back of the bushes. 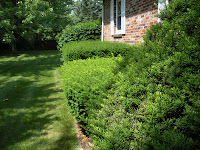 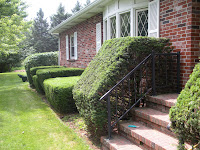 When she's finished, though, they are very nice looking.  There are other bushes, like three burning bushes and others, that dot our landscape.  GD also gets them into shape.
It may appear that the shrubs are uneven.  The are, deliberately.  Shrubs two and four are lower than numbers three and five.  At the far end is an example of how GD improves the looks of the burning bushes.
And for all her hard work, we allowed her to cook us hamburgers on the grill.  What more could a good daughter ask for?
(Some day, perhaps, I'll learn how to format picture and text properly.  Maybe not.  However, on the composing screen, these all fit together beautifully.  Oh, well.)
GiM
Posted by GiM at 6:00 AM