What, in the name of all that’s good, happened overnight? I awoke this morning, as did just about everyone, to a bunch of snow on the ground. When the Gators went to bed last night, all the blacktop surfaces in our yard were black. We got just a smidgeon of snow in that last storm but in our little corner it mainly just rained. 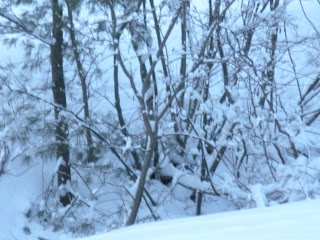 I know these look like earlier ones, but, honest, taken this morning.
As a result, after neighbor Ed moved the slush off the area with his plow, we had nothing else left to do. Then I woke up this morning to the “beep, beep” of trucks backing up and looked outside only to see a bunch of snow on the ground. Now that was a surprise. Trucks were plowing a nearby business complex. 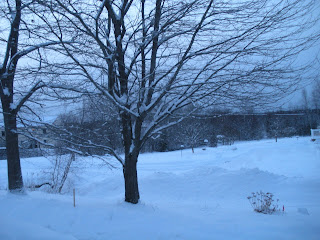 Neighbor Ed did make a pass or two through our yard before five this morning as he plowed his yard. We appreciated that because Gator Wife leaves for work before six, so she was able to get out OK. She gave me a call after she got to her workplace and said we weren’t the only ones caught by surprise. Plows, she said, were in just about every driveway and business parking lots trying to quickly get the cleaning done before the cars got out there. 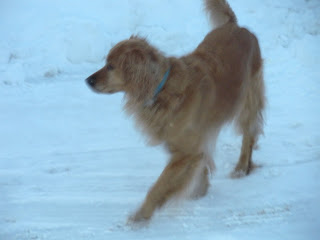 Even Gator Golden looked around with a "What's this?" expression.
I had thought we had gotten off rather easily from yesterday’s rain and then to awake to this mess. The morning weather gal said we’d have a beautiful day tomorrow, but then more snow could arrive for Sunday. I certainly should have known better after all these years of seeing Maine winters, but I had gotten my hopes up that this season was ending. Not funny!
I should mention that by seven this morning, the sun was out.

I’m tempted to comment on my feelings of the mortgage bailout plan, Ill. Sen. Burris, and the erosion of rights, but I think I’ll take a vacation from ranting until next week. Besides, I’m simply not in that mood this morning.

I’ve been a little remiss in not mentioning the Maine high school basketball tournament now playing out in three locations: Portland, Augusta and Bangor. I love watching the kids play from Little League (in baseball) right through College. College level begins to wear off a little, though, as those men are a long way from being kids. But the high school tourney going on right now is all innocence. Both the young men and young women are playing these games the best they can and all in the name of their schools.

The best part of the basketball tourney is that most of the games are broadcast on MPBN, the Maine Public Broadcasting Network) and when more than one is going on at the same time in Augusta and Portland, Time Warner Cable makes its Channel 22 available. I believe the games in Bangor are also televised in Northern Maine and we only see them when both Augusta and Portland are idle.

Of course this school vacation week in Maine isn’t just for basketball championships. The state champions in all the winter sports are also determined this week. The skiing, swimming, track, cheerleading, wrestling, and the others don’t get anywhere near the attention basketball gets. Nevertheless, they are just as important to their participants.

Right now, though, basketball rules. It’s being shown on MPBN, so you know where most of my viewing this week has been and will continue into the weekend. The Class A champs won’t be decided until next weekend, but those games will be televised, too.

Speaking of weekends, we have another one here beginning tomorrow.
GiM
Posted by GiM at 7:02 AM