My wife Sandra and I took our annual leaf peeping trip and, as usual, it was early in October.  We found a reasonably good mix of peak leaf changes and some that had already passed peak.  For the most part, the changes in Western Maine and Northern New Hampshire didn't disappoint us.

For the first time, though, I saw for myself why folk who live in the affected areas complain about the introduction of wind mills to the Maine mountains.  "Oh!  Look!" I said as we drove along one of my favorite leaf peeping routes, Maine 17 between Mexico and Rangeley.  I didn't count them, but there must have been 7 to 10 of them slowly spinning their huge blades. 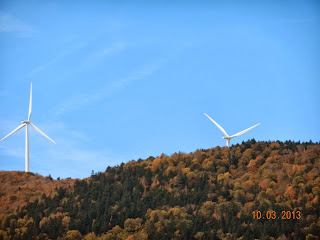 These are just two of the several wind mills along a ridge on the
nearby mountain.  Many of them were much higher than these.
Nevertheless, the once beautiful sight along the route is now
dominated by the whirling dervishes.
Our first reaction was that they certainly didn't look too bad sitting up there and we couldn't hear any of the noise that local residents complain about.  But they did dominate the view.  Perhaps if we lived on that road, or others with that white spinning picture, we would have felt differently.  As we drove past a beautifully kept home facing the mountains, I began to understand at least one of the objections.

The hard work the family, and many others along the route, had done to get the magnificent view of the mountains was now diminished by having to constantly look at those towering wind mills.  Of course I don't live there and we didn't stop to talk about them with anyone since this was a just a pleasure trip and not one for research, so there is always the possibility I'm wrong and the the electricity producers were providing money to lower taxes.  From all I've read, I doubt they were lowering the cost of electricity.

I would not want a wind mill farm in my neighborhood.

There was another topic which caused me to do some thinking, too.  I never realized the cost of gasoline was so wide spread in Maine.  We saw gas stations selling gas ranging in price from a three dollars 30.9 cents a gallon to three dollars 99.9 cents.  That makes no sense, thought I.  In one town, South Paris I think, the prices ranged in a two or three block section of Route 26 from the low of $3.309 to $3.959.  That last one was at one of the largest, if not the largest, distributor in Maine.

The highest, though, was just a tenth of a cent below four dollars in or near Canton, a town between Turner and Mexico.

Those prices got me to thinking about the prices just in Greater Portland which vary widely from station to station.  What it all said to me was, "This confirms what we all know and have suspected for years, the price of gasoline is purely artificial."  But then again, what prices aren't?

I'm just a simple consumer and don't give a tinker's whistle about all the excuses.  My only concern is how much I have to pay.  Ask any gas person why the prices are so darn high or why there's so much variation between them, and they'll tell you about the many variables that go into pricing.  They love those variables because they can be set at whatever they want.  In the end, they'd have a hard time convincing me the high prices are necessary except to line some pockets.

And why are the prices so much lower in York and other counties than they are in Cumberland?  One very visible company has different prices at several stations in just a short distance between Portland and Biddeford.  Guess where the highest ones are.

Back to leaf peeping:  It's getting late and the change to dull is already prominent in many places.  If you're a leaf peeper, time is running out for the best colors.