Heading into a busy season

We're heading for the end of another month as October draws to a close this week.  October in the GiM swamp has been rather uneventful.  We're looking forward now to the beginning of the exciting season.
The last two months of the year include among other things the creation of our seasonal village, Christmas Village 2013, my wife's and my 52nd wedding anniversary, Thanksgiving, Christmas, and New Year's Eve.
That last one is probably the one that just passes here as we have reached an age where just staying home marks our yearly changeover.  I probably should include this Thursday's Halloween in the list, but, like The Eve, we don't do anything exciting except pass out some treats to the one or two kiddies that visit our house.
We did have visitors over weekend.  Our daughter and her puppy Brandy came over to visit us and help with a couple of chores we needed help with.  I had thought we finished our year's vegetable garden activities two or three weeks ago, but I had forgotten the potatoes.  Our potato beds were dug up Sunday.  It was a poor crop.  In fact, this may have been one of the least exciting vegetable garden years we've had.
A couple pieces of furniture were also swapped around as we brought my stationary bicycle into our TV room.   I might get more use of it this winter as I will be able to watch TV while riding it.  We'll see if it gets more use or not.
I won't go into my feelings for my camera again, but the 25 or 30 pictures I took remain a mystery.  This one
﻿ 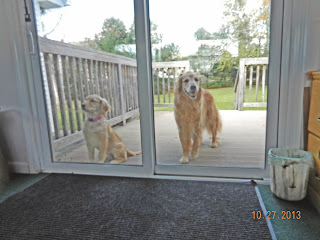 is alone in worth sharing with you.  I realize how confusing two dogs can be so I'll tell you that Daughter's puppy Brandy is one the left while our Golden Mariah is on the right.  Hope that helped.  The dogs were asking to come in and join us on our breezeway.  They had worked very hard helping us with the potatoes.

I hope you have a great week.  One good thing about the last week of the month is the last Wednesday of the month, the day a bunch of us retirees, all of whom "graduated" from our jobs from the same place in the 1990s.