Our daughter's growing puppy did visit us recently, but there were no real new picture opportunities involving our dog and the pup.  That simply means another week without pictures.

It's hard to believe the countdown to our annual winter Village, which we call the Christmas Village, has begun.  We had our first planning discussion over the weekend and generally decided to keep it pretty much the same as it has been for the last couple of years.  We'll have village construction behind the two wings of our couch, on the shelf in front of the picture window, and a main larger display in one corner of the room. 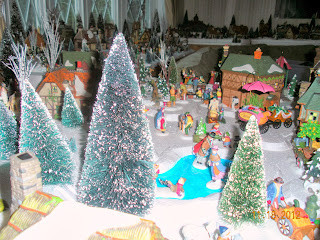 Of course we will arrange the pieces a little differently.  One area of discussion is incorporating some larger pieces this year, possibly in an area of their own.  The room's corner where we usually have our signature piece...it was Kensington Palace last year...might be made into the large piece section being discussed.

Why planning now?  Well, our anniversary is now just about three weeks away as is Veteran's Day, the day we traditionally start our project.  We try, and do succeed, each year of completing the display and lighting it Thanksgiving weekend.  It remains a prominent part of our season until shortly after Labor Day.  Since Veteran's Day, Nov. 11th, is on a Monday this year, we probably will begin the preceding Saturday.

We'll keep you posted, probably with pictures, once we get underway.

It was quite a time for the Red Sox over the weekend as they won the outright championship of the American League by beating Detroit four games to two last week.  The St. Louis Cardinals won the National League title and the two teams begin the 2013 World Series Wednesday night in Boston.  Boston got the home field advantage because the American League All-Stars beat the National League Stars last summer.

It's probably more common than an oddity, but this is the first year I've followed the standings as closely as I did this year.  Nevertheless, I can't remember when the two best teams in baseball by way of their league championships go into the World Series, where both belong, with their respective league's best won lost records that were identical.  On paper that should give us a fantastic World Series.

I'm not too excited this year about the Patriots.  Bill Bellichick allowed too many of his stars to get away, probably by design, over the spring and summer and now the team is paying for it.  They really aren't fun to watch this year.

There's one other team I usually follow very closely this time of year; but, like the Patriots, they aren't very exciting this year, either.  A different reason has led my college team, the Gators, naturally, to mediocrity.  They've been without a quality coaching staff for three years and now recently dropped out of the elite of college football.  Their present coach simply needs to find a new job somewhere else.

Perhaps The Kid will bring her puppy over one day this weekend as she likes to use our big yard to run the dog and I can find some new picture opportunities for another time.