What a nice weekend we just had! The weather cooperated nicely even though the clouds did roll in yesterday afternoon. My little unofficial temperature reader broke the 80 mark for a few minutes around midday yesterday. The afternoon sea breeze and those clouds didn’t let it stay there for long.

The morning was beautiful. Gator Daughter and her Golden arrived shortly after ten and she and Gator Wife spent the rest of the morning, right up until lunch time, putting some plants GD had bought for her mother Saturday into the ground. While they were busy at that chore, the Gator Dude rode the family tractor around the lawn and discovered it should have been mowed probably last Thursday. But it looks beautiful today.

All GW’s flower beds are protected from our dogs by an Invisible Fence so the two dogs spent most of their time just sitting outside the beds keeping a careful eye on their people. Writing this this morning makes me wish I had had the foresight to have my camera outside for a picture of those pretty little girls keeping a watchful eye on their “mommies.” What’s that old adage about hindsight vision? I was pretty busy riding around the lawn, anyway.

Speaking of the Invisible Fence, it does a perfect job in keeping both Golden Retrievers within the yard. They have full run everywhere in our yard except in the flower beds and the vegetable gardens. Unfortunately, the fence does nothing to keep other animals out of the gardens. GW checked her vegetables Saturday night and discovered we had two rows of carrots doing very nicely. When she checked again Sunday morning, we had one row. 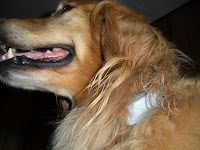 Invisible Fence, incidentally, is the trademark name of company that sells and installs an underground electric wire along lines set by the property owner. The dogs wear a collar with a receiver that picks up an electric signal and beeps if the animal approaches the line. The dog has about three seconds to back away from the signal or it gets a low level zap. (Left: That's the device on her neck.)

There’s about a three week training period where the dog learns where the lines are using flags marking them. Then there’s a week of training with the line electrified. I don’t know what the normal is, but both our dogs only got zapped once, at least during the training and that was five years ago. I’d be surprised if she didn’t check for at least the beep a few times since then. The company, incidentally, leads the training sessions.

This is the day we may learn if Gov. Baldacci is a man of his word or not. He has said he would not support any broad base tax increase. The Legislature has passed and sent to him for his signature a tax package that can be called nothing but broad based. Sure, it lowers the state’s income tax rate for a few people, mostly those in the highest income brackets, but it increases the number of items to be included in the sales tax schedule. The Democrats call it revenue neutral, which is far from what will happen, but the governor just might use that phrase to weasel out of his word.

Actually, there are many tax increases facing Mainers, including a tax on medical bills (which was defeated in a people’s veto just last year) and a higher tax on food and lodging. Taxing food in restaurants certainly is broad based as just about every Mainer will be affected. As is the change in sales tax because we all have to pay that one, too.

We may learn before this day is over what the governor will do with tax measure. The value of his word could be on the line.

Oh, want to read a good analysis of the increase in taxes in Maine? There was a good one in yesterday’s Lewiston Sun Journal.

An Invisible Fence is a good idea if you want to keep your dog safe.
I love my wireless dog fence because I never have to worry about fixing broken wires. A Wireless Pet Fence is a good option for pet containment.