Another June Weekend; A Little Rant, Too

Another weekend is upon us. Gator Dude and Gator Wife like weekends primarily because it’s a time when our daughter spends a lot of time with us. Of course just how much depends a lot on the weather and it appears the weather will be play a role this weekend.

We had a whole bucket full of rain Friday, my rain gauge said our yard received 1.55 inches, so I’m hoping the end was early enough to couple with sunshine Saturday morning to dry my lawn enough for me to get the grass cut. As you’ve read here before, the bagging attachment on my tractor doesn’t like damp grass and fights back by clogging its chute.

Daughter Gator should be here for lunch and, depending on the dryness, what else she and GW do will be determined after lunch.

The Sunday weather forecast has changed somewhat. We had been told that more rain would come in Sunday afternoon, but later were told the day will be partly sunny. We’ll decide Sunday morning when we get the real forecast by looking out the window to decide on a course of action for the day. If the sun does win, GW and her dog will be here by late morning into mid afternoon.

Her dog and Gator Golden will have a blast as the ladies will most likely be outside most of the time and they love it best when their humans are out there.

Me? Well this is the first weekend of the College Baseball World Series in Omaha, Nebraska, and I love college games. The Gators didn’t make it as they were eliminated in the Super Regionals leading to Omaha, but that doesn’t mean I won’t be watching as many and as much of the games as I can.

For those of you interested, cable guy was here Friday afternoon to once again fix my cable reception on HD channels. It’s been the umpteenth attempt since March. I really won’t know until after the weekend, and especially after watching the sports on HD, how successful he was.

And while I’m off weekend gentle mode, I have a rant. Oh, it’s a mild one, but nevertheless a situation I don’t like developed Friday. We have been warned what seems like forever that the analog TV signals would be shut down Friday morning, and they were. We also have been warned that the radio broadcast of Channel 6 would end at the same time. But, as you probably know, warnings aren’t really noticed until the situation actually happens.

And it happened Friday night. As I do very frequently, I went into the kitchen to do some work and, as I’ve done for years, turned on the FM radio to pick up the news on WCSH-TV. All I got was someone speaking Spanish. I either said or thought an expletive and remembered that the signal on the FM radio ended at nine o’clock that morning.

Darn. I will really miss that broadcast. The government simply has screwed up again with that edict. 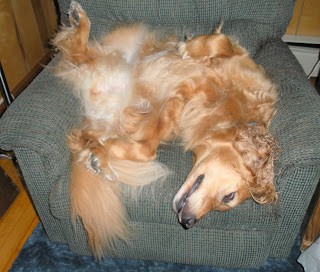 Gator Golden has her own way of waiting out the rain.
This was her system for Friday.
So that’s the Gator Clan weekend. I’ll let you know how it turned out when I return Monday.
GiM
Posted by GiM at 6:46 AM