Simple weather remark: Rain. It should be leaving the Greater Portland area later in the morning and we could see some sunshine in the afternoon while we patiently wait for tomorrow’s rain. As I say frequently on senior fitness days, my old body is affected by wet weather and that was true today. I successfully completed my routines, my body protested, and I didn’t add anything new today. C’est la vie!

I’m absolutely not sure whether a measure given initial approval in the Maine House of Representatives is an honest attempt to lower the cost of government and make it more efficient or a smoke screen to make Mainers think the House members care.

In any event, the House has said it might approve an amendment to the state Constitution to reduce its membership size. That preliminary endorsement would, if ultimately passed as is, reduce the number of the House districts from 151, the present number, to 131. There have been calls to reduce the size of the Legislature for several years as it is one of the larger ones in the country for the state’s population size.

Most calls have been for more than the 20 now proposed, but it is a start. The size of the Senate, however, would not be affected if the change ever does come to pass. The call for fewer than the current 35 state senators has also been made, but that is not part of the House plan.

I haven’t seen any projected dollar reductions connected to the measure, but at least the House members seem to be recognizing that the size of Maine’s government is part of the budget problem in the state. Once they can connect the dots on that recognition, then a start on cutting other governmental areas could also begin. What a wonderful development that would be.

More action by House members is needed before the measure can be sent to the Senate for consideration. 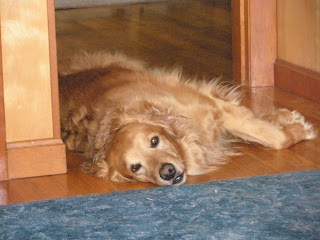 Look at that face. Gator Golden seems to be patiently
waiting at the doorway to the den. If she could think
in English, I think she might be thinking, “Dad, why are
you always sitting there with that computer. I need you
to spend some time playing with me.”
There are times when I wish my courage to try new things was even half as strong as that of my Fearless Friend. He sent me an email the other day from his Florida home about the new operating system that Microsoft Corporation is now releasing. The company is making Microsoft 7 Release Candidate available for beta testing.

Microsoft 7 is the latest greatest operating system which the company hopes will solve all the problems and poor ratings of its XP and current VISTA systems. The new system will be on sale to the public either late fall or early next year. The RC will automatically expire in June, 2010, with a nightmare of warnings, such as bi-hourly automatic shutdowns beginning two weeks earlier, as it closes its usefulness.

You’re probably wondering what all this has to do with FF. In his email to me he said he’s been reading about the RC on a variety of sources he follows regularly. They’ve all been extremely positive reviews. I have read similar reviews myself along with a warning that no new Microsoft release should be adopted for at least six months after its release. FF agreed with that assessment.

Nevertheless, he’s considering trying the RC on an old computer he has when he returns home to Maine later this month. He would like to see for himself how it fits in with his computing needs. I urged him to give it a try as I’d like his report on it.

Well I can’t get that darned “trying” off my mind. I currently have three computers in use in my house and one of them just might fit the minimum requirements for Microsoft 7 RC. It currently is operating under the XP system, but it really needs a good cleaning. Perhaps loading the beta on it would give me an idea, too, of how it compares with VISTA, which I have on my laptop. The third computer is my main one, also with Windows XP.

Unfortunately for me I lack FF’s “just do it” attitude. Hmmmm. He’ll be home in a few weeks. I wonder if I could talk him into spending some time at my house. Now that’s something to ponder.
GiM
Posted by GiM at 8:58 AM