After the huge snow/rain storm that slammed into Maine yesterday, this first weekend in April is turning out to be really beautiful and signifying that warmer, seasonal weather is heading our way.
Officially, Portland got 5.5 inches of new snow yesterday, but the depth was held down considerably by some mixed in rain.  Other places got considerably more snow as the town of Standish, for example, was over ten inches and even more snow fell in other places.
Today, my driveway is black and clear as our temperatures today will take away much of the remaining snow.  The rest of the weekend will be seasonal with temperatures in the 40s and perhaps a 50s reading or two. 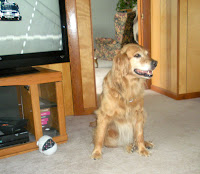 Gator Golden continues her improvement from surgery two weeks ago.  Yesterday and even more this morning, the little dog is acting more and more like her old self and our attempts to keep her from running and jumping are getting more challenging.  Outside is easy as she's on leash most of the time, off only so she can do her duties in comfort. 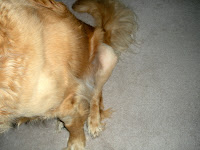 Now using all four legs (it was a hind knee that was surgically repaired) with very little hint of discomfort, she is moving much more quickly around the house and she is begging, I mean trying to put us on a real guilt trip, to be allowed to use her two chairs to see out the window.


On another topic, I was happy last November when Republicans captured both branches of the legislature and the governor's office in the elections.  It's been 40 years since the GOP has had a real chance to show what it can do to make our state a better place.
What they are all proving is very simple.  They have lost all vision of how to lead and reform in those passing years.  Today, it certainly appears that they're doing nothing.
Well, that's not really fair; they have had one major accomplishment since getting control.  They have adopted the whoopie pie as the state's official treat.  And that says it all about their abilities, at least so far.
Have a great weekend.
GiM
Posted by GiM at 7:47 AM