Right on schedule!  We have erected two village sections along our living room wall behind a couch and in our front window.

We begin our annual Christmas Village display on Nov. 11th, coincidentally our wedding anniversay, and officially light the completed project during Thanksgiving weekend.  This year we began a weekend early because of some enhancement to the base structures.

Our goal for the Nov. 13-14 weekend was to complete the bases, put up the Styrofoam® snow base on the couch and window sections, and position the houses and shoppes along with their lights. Our Village is a combination of the Department 56® and its Victorian and Dickens Village Series.

Although only the structures themselves are now in place, below is a mountain section; many more items, including Department 56 Village accessories, trees, people, and snow will be added. 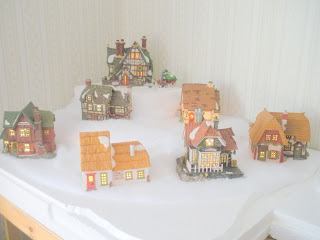 ﻿The structures for the section behind our living room couch (below) have also been placed.  Like the mountain above, this section will also have accessories, trees and snow added. 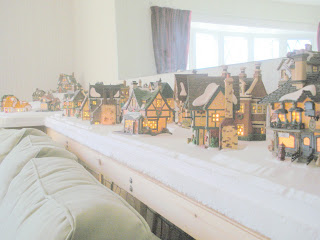 I should note that the pictures in this post appear to be a little washed out.  That's simply because I was trying to be "cute" with my camera and show the buildings with lights on.  Just like in previous years, I'm still on the beginning end of the picture learning curve. 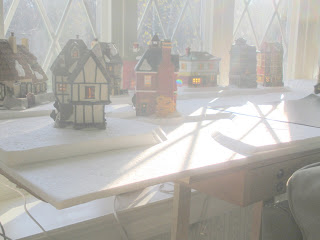 The slightly expanded window section (above) is also about ready.  Those of you who have followed our Village in previous years, mostly on my web page, will see that this section, our popular display of Charles Dickens' A Christmas Carol, doesn't change much.  The front left corner remains stark and square because it will be connected to the main section.

The main section will be completed next weekend.  We'll begin adding the accessories during this week and next.  Then trees and snow will be added Thanksgiving Day.  Our goal is to officially light the completed Village during the Thanksgiving Weekend.  There's a small chance it will take place Thanksgiving Night, however.

Notes:  Department 56 and its Village Series mentioned here are registered trademarks of Enesco, LLC.  The various structures and accessories are also copyrighted by Enesco.  Styrofoam is a registered trademark of the Dow Chemical Company.
Posted by GiM at 3:22 PM