Our reconstruction project is taking much longer than we had anticipated, but there’s a good chance we’ll finish this weekend. That project is solidifying frames for our Christmas Village we light every year. We have more than a hundred Department 56 Victorian and Dickens pieces which allows us to change the village each year without having to redesign the basic layout.

Last year, however, we did a complete overhaul of the layout, including moving displays from the two rooms we had used to just the living room. Now we have a display between the couch and wall, one between the entryway and the other end of the couch, and a third which takes over the area in the bay window. That last one doesn’t change as it is a depiction of Charles Dickens immortal seasonal piece, A Christmas Carol.

Every piece from Scrooge and Marley’s Counting House to Scrooge’s home, to Tiny Tim’s and Bob Cratchet’s house, and most of the other scenes in the novel. It is the most popular display we have and it changes little from year to year.

But I’m way ahead of that story which you can count on reading during the season. Right now we’re just working on the frames. When we redesigned the total layout last year, we did construct new tables to hold the display, but, not being a carpenter of any sort, my tables were rather flimsy. We thought two of them were going to fall over before the season was over. Sheets of plywood are used as table tops on the frames, and then there’s Styrofoam sheets that serve as the snow-covered landscape for the houses, people, and other accessories.

Normally, our villaging begins on Veteran’s Day and the Village is lit ready for viewing during the Thanksgiving Weekend. Gator Wife had an idea to add a mountain to the layout so we decided to get out the frame we would use for that. That required adding a second frame to the base lengthening what was already a very wobbly table frame. So we decided to do it right and start with bracing up the frame.

We did that last weekend. Monday was a very busy appointment day so Tuesday and Wednesday brought about adding the length for the mountain, this time properly braced. Once attached to the old unit, both became extremely stable. We still have to add the mountain.

Thursday GW brought up the pieces for the other wobbly table. The legs on that table were rather short which allowed a couple of dog tails to raise havoc with the snow, trees and other small items on the layout last year. We decided then to make it taller and that was our project Thursday. Friday, when GW got home from work, we began bracing those legs to add a lot of stability. 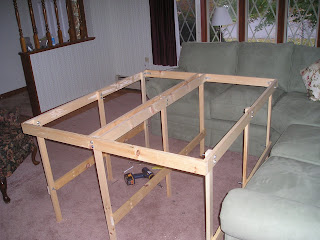 This the table on which we're working. It is where it is for space to work, but when it is finished, it will go in that corner straight back. When we finish with the legs, a piece of plywood goes on the top to serve as the table top for the various Village structures and accessories.
And now the weekend is upon us. Saturday will be devoted to completing stabilization of the biggest table we have. Since Gator Daughter and her dog will be here for part of the day, she’ll give us a very welcome hand and probably we’ll get started on the window frame. That one only has three legs as most of it sits within the confines of the shelf of the bay. With her help we’ll probably have it all completed by the end of the weekend and we’ll feel much better when we start the main project on Nov 11th.

When this year’s activity started, I must admit I resisted because I thought we were getting started way too early. Once I saw how much the strength and stability of the frame was progressing, I quickly changed my mind and have told GW that she had pressed for the correct reason. We will be able to sit back after this weekend until Veteran’s Day and then feel our pride of accomplishment grow as the Village grows…safely this year.

Ours will be a busy weekend but we’ll have fun and enjoy both the work and the company of our daughter and her dog. I hope you enjoy yours as well and we’ll be back on Monday.