Another beautiful, long weekend is over. Although yesterday was just a little raw and there were some showers in the neighborhood, for an October weekend, that one was just fine. We started off this week this morning with our bi-weekly visit to my Senior Fitness Center. I left there feeling like today’s workout was a productive one. Except for those darned side leg lifts and standing on that bleeping ball.

Of course there were a couple of noteworthy events along the way. Among the great events was the Gators big win over previously unbeaten LSU. The drubbing sent the Gators back into the top ten … one poll had them in the top five … in the championship race. The Patriots proved once again that they aren’t in the same class they were before Tom Brady, their quarterback, got injured in the first game. Saturday the Red Sox got their comeuppance against the Rays in St. Pete, and then there was last night –probably best we don’t go into that one.

Our little place had a beautiful weekend for the most part. We, along with the help from our daughter, got a lot of stuff accomplished. Even though it was a little early, the winter lawn fertilizer was dropped and another cart full of acorns got cleaned off the driveway and nearby yard and some leaves got vacuumed by the tractor.

Each year we build a Christmas Season Village in our living room. It is a massive affair which adorns three areas with lighted replicas of a Victorian/Dickens village. Our entire collection is from Department 56®. Normally, we begin building our village, and it gets modified from year to year, on November 11th, a holiday we both had off from work, and gets lit during Thanksgiving Weekend. We only use a portion of our collection each year, so part of the modification is the utilization of different pieces.

This year, Gator Wife had an idea for a construction change in one section which we have located between the back of our couch and a wall. This is what that section looked like last year: 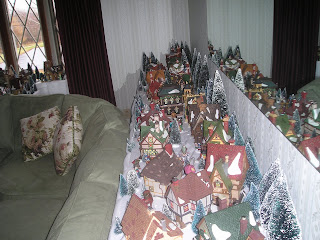 It is the far end of this portion of the display GW wants to change.

Basically, she wants to have us build a mountainous area at the far end so we brought the frame and platform out of storage yesterday. We’ll put it up this week as, you may recall from an earlier post, she is on vacation. We’ll work on a design and then build the necessary parts to see if we can build that area.

I might take a page from the blog of my blogging mentor, Sheepish Annie, and show you progress pictures from time to time so you can follow our progress.

We’ve learned of some fascinating campaign finance information over the weekend. The Fed Up With Taxes organization released its quarterly finance report. We learned the “Vote Yes” on the beverage/insurance tax question, Question 1 on the November ballot, group has raised a lot more money than those hoping to defeat the repeal referendum.

According to the reports, Democrats running in Maine have received 43 percent of their finances from one source, the boyfriend of the Democrat First District Congressional candidate. I haven’t seen a report of the quarterly finances for the Republican, yet.

The Casino “Yes” group seeking to have voters approved an initiative for a gambling casino in Oxford County has vastly outraised and outspent the Casino “No” group. All of the funds for the flawed casino law we’re being asked to approve (Referendum Question 2) came from Las Vegas gambling companies. That raises a question for me at least: Why is a Las Vegas company so interested in what it calls providing jobs, taxes, etc., to help Oxford County, Maine? Oh! Could it possibly be because the vast majority of the money it gets from the casino will go to Las Vegas and not stay in Maine? Hmmmmm?