During the first part of this week, I said snow was forecast for Wednesday.  I also said that often when the weather people predict a big storm a week early, the storm rarely materializes as it heads out to sea.
This storm stayed on course.  The forecasters got this one about as correct as they could get.  As I jot this down, there's more than a foot of new snow in my yard and it'll take a couple of days for Gator Wife's and my old bodies to get it all cleaned up.
But it sure is pretty! 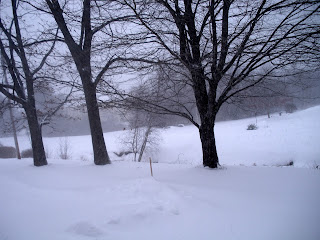 By mid morning, the snow completely covered our yard.  My neighbor had plowed the driveway earlier and even his work was getting covered up. 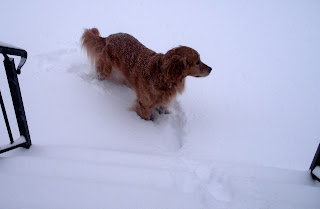 Gator Golden had a great time romping around.  It was late morning when we caught her almost up to her belly in the snow.  It didn't bother her a bit. 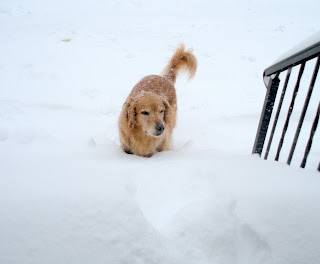 When she decided to come to warm up, she gave a shake to get the snow off and headed up the porch stairs.
Wind caused even more drifting and our neighbor cleaned the driveway for us once again.  This storm will go down as a major one, and one that the weather forecaster simply got right, perhaps a little too "right."
January 12, 2011...a day to remember for the storm that filled our area.
GiM
Posted by GiM at 3:29 PM