Almost a trip down Memory Lane

We’re told by the weather folk that today will be one of the coldest so far as strong Canadian air is taking over our area. It will be short-lived, however, as we should be back into the 70s by the weekend.

Today’s message came very close to being one of my trips down memory lane. I like to take those trips as I have what I consider to be some really nice or fun memories. Today’s trip was going to be about one Gator Wife and I took back in the 1960s, even before our two contributions to the nation’s future occurred.

When I was a youngster like all youngsters back then, I learned about the Pilgrims and how they fled England primarily to escape religious persecution. One major event was their landing in Plymouth, Massachusetts. I say “one” major event because we all know those English folk landed in other places, too. (Since I’m not sure it’s known today, I won’t use the spelling “Plimouth” here.)

Unfortunately, Plymouth was so close, yet so far. I never visited that famous Rock on which the first Pilgrims set foot on America. What a coincidence that my mother-in-law hailed from there and GW still had, and even has today, family living there. She had been to Plymouth Rock many times.

In 1967 the family had decided to give her grandfather a “surprise” birthday party and, naturally, we were invited. Yesterday, I came across a whole box of slides I took during that trip and that triggered what could have been a nice trip down that aforementioned lane. I converted them to digital pictures, but after all the party shots were completed, I realized they would have meaning only to her family.

While we were there, three of her cousins learned I had never seen Plymouth Rock so after the party, they insisted on taking GW and me there. I must admit I was excited about seeing the great place where the Pilgrims had first set foot. I imagined a huge rocky outcropping that would become Plymouth Rock and anxiously agreed to the visit. It was, incidentally, only minutes away from where we were. 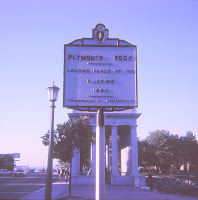 We went to this wonderful park area where, in a fenced area, we saw Plymouth Rock. That great granddaddy of rocks, that magnificent Pilgrim landing place, that history oozing beginning of America was all of three or four feet across. I’m sure glad I didn’t have to step off the Mayflower onto that probably slippery slope as I wouldn’t have fit. That was a huge letdown. I truly experienced an unhappy disappointment.

Unfortunately, the reason I’m not taking a memory lane trip is because the pictures of the pebble aren’t very good quality and it is unrecognizable. 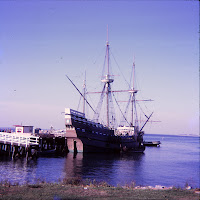 eing a replica of the ship that brought those brave explorers across the ocean so many years ago. In part, thanks to them, The United States is the great country it is.

By the way, I am historically linked to that rock. Some of my ancestors were there for that historical beginning. There’s a town near Portland named after one them (My own grandparents hailed from there.) and in Saco is a statue of one.

So that’s the story behind what could have been a Trip down Memory Lane. Unfortunately, my photographic skills back then seemed to be lacking. Can I blame the camera again?

Now, let’s see. What can be our topic for today?