I still don't like the weather, but this weekend was pretty.

Edited Sunday morning to add:  I violated my own word last night that I wouldn't spend any time watching that Republican debacle.  I watched most of it.  I went to bed last night feeling that no matter whom we elect in next November's presidential election, this country is in real tough shape.  The Republicans and Democrats are just about even in incompetence.  There isn't a leader among them.  If you are like me and believe these two terms of the current electees (Yea, I know!) is not good for America, just wait and see what we're in for in the next term.  Wow!

Now on to my previously posted breather.

We'll see what our (Maine) Legislature does Monday, but if it's typical, the next big political event will be Tuesday when the New Hampshire presidential primaries take place.

Over the weekend we were told this week could see some snow on several days.  Meanwhile, our first major storm in our area fell last Friday.  Portland got 8.8 inches of the heavy stuff, but the temperature on Saturday along with a warm sun helped folk get their driveways and walkways back, at least near back.

This is the way it looked outside our front window Saturday ... 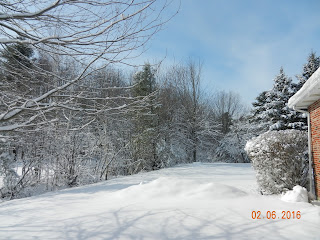 I've been complaining about the little snow we've had this winter as a combination of my age and physical restrictions have made the winter difficult.  Nevertheless, this was rather pretty.
If you've been around here the last few years, you know how much I showed off our Golden Retriever Mariah.  As I've mentioned earlier, Mariah went to Doggy Heaven last winter after a bout with cancer.  A new Golden adopted our daughter a couple years ago shortly after one she had left her.  Here is Brandy enjoying this snowy weather while visiting our house over the weekend. 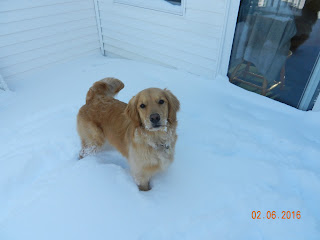 There's just something about Goldens that get deep under one's skin and Brandy is another precious one.
We'll get back to the serious stuff this week.
Dave
﻿
Posted by GiM at 9:00 PM