It's getting nearer, that Presidential election

The seventh mass shooting in five months has shaken up both America and San Bernardino, California.  Something terrible is happening in America  and it is reminding of us of how some of the other countries in the world have been taken over.  I am collecting my thoughts in information and may have more to say about these events in the near future.

Meanwhile, here are some thoughts on other issues.

Golly  We're down to the last hurrah.  It's hard to believe the 2016 Presidential election is now less than one year away.  It sure does seem like the candidates have been at it for three years or more.  I know that's an exaggeration, but it surely seems like it.

The really downside of all that campaigning isn't just the amount of it but rather that no one truly worthy of leading this great country has yet to come forward.  I was asked a few months back if I could vote for Donald Trump as he had been, and still is for that matter, leading all the polls for the Republican nomination.  I'm a Republican.

Sure, I answered.  Well, now I'm not so sure.  He seems to agree with me on many issues I see in this country, but he also shows me he just might not be ready to lead the Free World.  Then there's Dr. Ben Carson.  He is quick, sometimes too quick, on his feet to answer questions.  And his answers also make some sense.  He just might be my flavor of the day, but I change my mind of favorite flavors often.

Sens. Marco Rubio and Ted Cruz haven't told me enough, yet, to gain my support.  I don't know what I'm really looking for at this point, but, even though I'm closer to being a conservative than not, I have to wonder if Cruz would be flexible enough, he is tea-partier, to be able really to help America.  And I've already told you here what I know about Rubio.

There are another four or five people seeking the Republican nomination.  None of them has gotten me to giving them serious thought .  Jeb Bush, for example, has...well, he has a family name.

Today...and I emphasize "today"...I would predict Rubio might be the winner of the Republican nomination; but I'll also predict I'll change my mind at least a dozen times before the primaries and the elections next year.

On the Democratic side, it's not such a crowded field.   It's easy to predict the nominee there.  Unfortunately, and I have admitted to being a Republican, I don't think Hillary Clinton is a believable woman.  I'm not sure she could lead a well-trained marching band in a straight line.  Wouldn't you just love to watch a debate between her and Putin of Russia?

As for Bernie Sanders, I don't think anyone in either party would lead us further into Socialism than he.  Actually, I hate to think about what America would look like if either he or Clinton were elected President.

So perhaps it's a "good thing" we still have 11 months to go.  Shucks.  Although it would have to happen like yesterday, maybe, just maybe, a real candidate will show his or her head before the Iowa caucuses.

Want to see another Village picture? 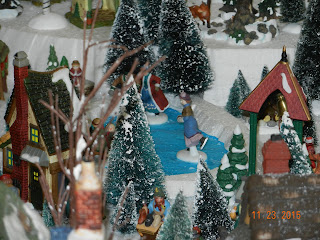 I'm prejudice about Golden Retrievers and miss mine enormously, even a year after her leaving us.  But now I look forward to the ads from that Toyota dealership in Rochester, NH, you know, the "No Bones about it" dealer, who is now featuring a new mascot Golden, perhaps a whole bunch of them.  I don't know what happened to that beautiful dog the dealer had, but now she's featuring the cutest pup and sometimes puppies. I'm no longer in the market for a car, but if I were, my first stop would be that dealership.
I'm kind of surprised that after, how long is it?  Three years now? Goodwill Industries is still trying to get rid of that little black dress.  Goodwill has some terrific stuff.  I know several folk who regularly buy clothes there and are extremely happy.  Apparently that little black dress isn't among the favorite ones.
Dave ﻿
Posted by GiM at 5:02 PM