I hope you made it through "Cyber" weekend.  Yeah, I know, that "Cyber" always used to refer just to the so-named Black"Friday after Thanksgiving; but it now seems to begin at the first of November and continue well into December.  There was a report last week on the NBC Today Show...sorry, I don't have a link...that indicated that the best "deals" are not on that Friday.  That report said that actually you might even be spending more on some items.

I'm not a shopping expert so I can't really say what the truth is on this subject, but it does raise a question in my mind.  If all those items can get such advertised big breaks in prices and the day is billed as the day stores turn from red ink to black, why do we have to pay the large prices the rest of the year?  If profits are so good on Black Friday, and I'm all for profit making, during this "cyber" period, why wouldn't they be just as good the rest of the time?

I do know I didn't get caught up in the shopping rush over the weekend; and, indeed, I did make a couple purchases "on line."  I was looking for a couple things I really needed and found at least one of them about $100 less than its normal advertised price.  That was a lot more than 50% off so I couldn't pass it up.  I was also able to upgrade one of my software packages for 40% savings.

It's not a happy day for us Patriots' fans.  At least Peyton Manning wasn't leading the Broncos.

It was also not a happy weekend for us Gator fans.  Florida, after a fantastic and totally unexpected comeback from four horrendous seasons to finally return to the top of the SEC with ten wins this year, lost to its arch-rival Florida State.  However, after watching the Gators, who won the SEC East Division, get mauled by the Seminoles after watching Alabama maul Auburn for the West Title, I'm predicting a devastating Gator loss this coming weekend for the SEC title.  Any chance for Florida to compete for a national title is gone.  Sugar Bowl, anyone??

Want a little break?  Here's a scene from our Village 2015 Christmas Display: 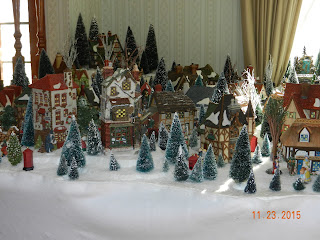 President Obama is in Paris for a couple of weeks of Climate Change talks.  More than 150 world leaders will attempt to find a solution to the global warming we're told is in effect in an attempt to save Earth as we know it.  After all, according to those experts, we humans are destroying the world.  Every time I read about this, I wonder who really benefits from "climate change."  Seems to me that whenever a solution is tried, the companies trying it gets its funding from you and me, the taxpayers, and company leaders just get richer with little or no investment of their own.  Also, prices go up.
Do we need change?  We probably need something, but let's first hear a real case for the need.
According to many reports lately, the "affordable health care" or "Obamacare" as we've come to call it, is running into the same monetary troubles it was supposed to have fixed.  Rising prices and the failure to enroll people at predicted numbers are making the "improvements" questionable.  There could be a new rush for health care reform affordability after next year's elections.
The problem is echoing the monetary problems of Social Security and Medicare.  The government created those solutions to help retires with dedicated funds paid by workers.  They were working until the government decided it could do better if it controlled the funds.  Now we're told they are going broke.
So the government wants to accomplish the same goal with the "Affordable Health Act."  Has anything, absolutely anything, ever improved with government intervention?
See you next time,
Dave
Posted by GiM at 6:19 AM