Thursday, the first full day of Winter, was one mighy spectacular day.  The sun was generally shining although there were a lot of clouds, too.  The temperature on my weather station device got into the 50s as did the official temperature in Portland.  And Winter was fully underway.  What a way to begin!
Now we're into the first Winter Weekend.  The best part of this one, though, will be Sunday's ending.  Christmas Day!  One of the nice things for some people is that it occurs on a Sunday and those folk will be able to take Monday off from work, too.  Of course next week is already a vacation week for most kids.
Driving around our neighborhood, we've seen what we perceive to be fewer decorative lights, but we've also seen some houses with decorations that we couldn't remember seeing in previous years.  Nevertheless, we do enjoy the ride.
I've told the story just about every year of my then 3 or 4 year old son's encounter with Santa Claus during one of those light viewing trips.  We still mention it around here some 40 years later.  I wish I had had a camera with me to record the boy's expression when Santa walked up to our car and spoke with him.  Santa, of course, was a nice person visiting his neighbors with a cup in his hand.  Probably was looking for some eggnog.
Now we are patiently waiting to see if we'll have a White Christmas or not.  All week I think I've been saying we will, then we won't, then . . .  Of course, under all the wonders was a hope we would.  At one point, the Channel Six weather people were promoting the possibility of a Sunday snow.  Then they changed their collective minds.  Since then, the chance has once again popped up.  Of course, a lot depended on "the track" of a storm that should be passing us by Friday.

We did awaken this Friday morning to a little light snow.  We are beginning to see some white in the yard.  According to the Friday morning weather forecaster Kevin Mannix, this will be a "quick hitter" and should be out of here by mid afternoon.  And that ends the snow until next week, except Mannix did keep just a chance of snow flurries or showers Christmas afternoon.

He did say that we in the Portland area could get from 1 to 3 inches of snow, closer to the 1 inch Portland south, but noticeably absent from his early morning forecast at least was the mention of a White Christmas.  So that wait will simply have to continue and Sunday we will have the final answer. 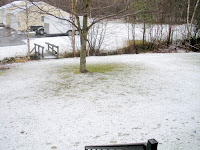 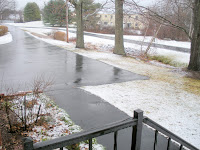 Some storm, huh?  This is all I see out our front door.
Bumma!  Here on the GiM swamp, a White Christmas is probably out.  The storm fizzled over our place and we only received a crunchy dusting of snow and then it turned to rain for a short while.  What whitening that fell doesn't appear to have any hope of making this a White Christmas here.  However, an email from my Fearless Friend indicated his place got perhaps a couple of inches and his driveway had to have some snow pushed aside.  Good possibility of a White Christmas there and in many other places in Maine, but not here at the coast.  This will be the final and only update of this storm.
With all that in mind and, like a little kid, patiently awaiting for a true white Christmas, I'm hoping you have a real nice Christmas, that you can remember your creator and give praise for all he has done for you.  And I hope you have a super weekend and the Merriest of Christmases.  Always remember, the love we have for our family and friends far outweighs those temporary gifts we'll be giving and receiving on Christmas.
Merry Christmas, everyone.  (My annual Christmas card will be here Sunday.)
Gator
Posted by GiM at 6:12 AM