The weekend we’ve been waiting for is finally here. Oh, we have nothing special planned for this weekend, but the weather people tell us it’s going to be just about the best so far this year. Officially, the temperature in Portland yesterday was 68, but the thermometer on my unofficial weather station got to 72 before it began to fall in the afternoon sea breeze.

Those same sea breezes may keep the temperatures in our area in the 70s again Saturday even though a high of 68 is once again forecast, but we’re told that inland near 80 degree readings are possible. They’re just about guaranteed in New Hampshire. I wouldn’t give up on touching 80 here in coastal areas either.

Sunday is a puzzle. A cold front should be just about halfway through Maine during the day and that could keep the temperatures down just a bit. There is a possibility the colder weather won’t actually reach us until late and the temperatures could be in the 80s at the coast. 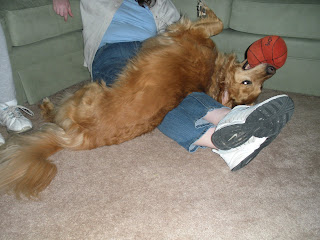 That’s Gator Golden draped across the legs of Gator Daughter last Monday. GG is rarely without a ball or other toy in her mouth when playing inside. You can see she has no fear of GD.

Gator Wife received some flower plants during the week and she and our daughter will take advantage of this beautiful weather to get them into the ground. Please don’t ask what kind of flowers. All I can tell you is they’re pretty ones. Now GW has told me specifically what they will plant; but when it comes to garden stuff, I only know plants, flowers, trees, bushes, and lawn.

You know, like, “We have some pretty flowers in the garden and some green bushes along the front.” Says it all as far as I’m concerned. Oh, yes, because they shed more acorns than President Obama’s budget sheds dollars, I have over the years learned the name Oak Tree. We have a couple on the edge of our driveway. But the oaks are a story for next fall.

GD will also fire up our DR (I have no clue what DR stands for; it’s a brand name.) tiller this weekend and give the vegetable plots a good tilling. I’d be somewhat surprised if vegetable seeds are planted this weekend, but the next nice weekend should see the beginnings of a midsummer fresh veggie feast. 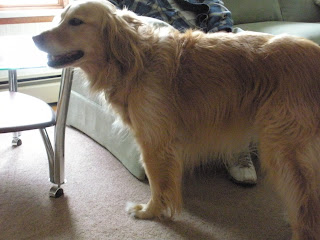 GD’s poor Golden Retriever doesn’t get too much mention here as we’re just a little partial to ours. But I do tell you she comes about every weekend to play with her sister. So, here is Gator Daughter’s precious Golden.

We’re a little later than many people in our area, but another part of this great weekend will be the firing up of the bar-b-que grill for the first time this season. When our son lived in the area, he cooked outdoors on the grill year round, but we old folk don’t venture out in the winter. As I jot this down, I’m not sure if we’ll be grilling one or probably both weekend days.

So that’s the way life is here for this last weekend in April and the weather gods have blessed us with a great one. It’ll give me a chance to refresh my head and I’ll be back Monday morning.
GiM
Posted by GiM at 6:57 AM