It's a very good weekend again!

Happy Easter Weekend to all of you who celebrate this Sunday. At least part of it is going to be a working weekend in the Gator land. The girls, at least the two-legged ones, have plans for Saturday in which I chose not to participate. Sunday will be a working day for all of us. In spite of the early showers Saturday morning, it looks like the weather might cooperate with us on our weekend activities.

Gator Wife and our daughter will be attending the Stars of Ice Show Saturday afternoon. Gator Daughter hasn’t missed one of the presentations since skating star Scott Hamilton began the show several years ago. At the time he also starred in it. He no longer skates and I’m not really sure if he’s still connected with the show. He may be the producer.

GD buys the tickets every year but we give her the money as a birthday present three or four months after they arrive. When she orders the tickets, usually the following year’s show the week after the current one, she always gives me the option of joining them and most years I politely decline. GW has missed the show only once when we miscalculated one of our trips.

The Gator Dude had already purchased theater tickets in Pennsylvania believing the ice show was on a much earlier date than it was that year. It didn’t stop GD from goingto the ice show. She took a friend with her.

I will drive them to the Civic Center so they won’t have to find a parking place in a crowded downtown Portland. For you who aren’t familiar with our area, the Cumberland County Civic Center is right in the heart of the city where parking is rather limited and hard to find. They’ll give me a call when the show ends and I’ll pick them back up.

We’ll stop by GD’s house to pick up her pup and come back home for supper. That’ll give the dogs a chance to do their Saturday romping.

Sunday will be a working day. Poor Gator Daughter will be working the hardest, I think, as she’ll be splitting her time between her mom and dad. GW is planning to get a start on her gardens, like loosening the earth and cleaning out any debris and weeds that were missed last fall. I’m going to change the oil in our three “outside” machines…the tractor, GW’s walk behind mower, and our multipurpose DR trimmer/mower/tiller.

One of the gardens has gotten a start by itself and already is showing some nice color. Actually, from a little distance it’s much prettier than the picture below indicates. In just a few short weeks it will be fully bloomed with a variety of flowers and color. 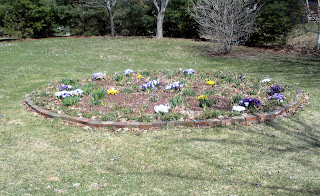 Obviously, the tiller machine won’t be used in this plot so it’ll take a lot of work with the hoe and rake to loosen up the soil just a bit. The majority of flowers in this garden grow from bulbs and they will literally replace the early flowers GW plants just to get the color started. These are perennials so they aren’t planted each year and come up on their own.

This garden, like all of GW’s gardens, both flower and vegetable, are protected from the dogs by an underground electric fence. Gator Golden would probably like to romp through them, but she can’t get any closer than this: 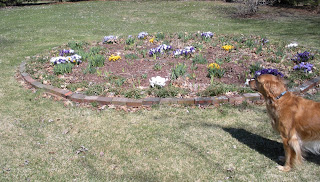 Unfortunately, the fence only keeps out the two Goldens. Just about any other animal, when GG isn’t around, can come and go as it pleases and some do. That isn’t too much of a problem in the flower gardens, but it can raise havoc on the veggies’ ones.

So, spring has put all the Gator family to work this weekend, and even for the Old Dude, it’ll be mostly an outside activity. While we’re doing all this work, I’ll be giving some thought to the coming week and will return here Monday.