Focus on the Gator Golden

Wasn’t it just yesterday or possibly a couple days ago that I was saying it was either the first weekend of March or the last one of February? March was one of the fastest months I can remember. I just looked over my calendar and there wasn’t anything particularly exciting about the month. Sure, I did get released from all my post-operation restrictions. Sure, I did get my teeth cleaned by at my dentist’s office. Sure, I paid my town’s property taxes. Sure, I went to my monthly retiree luncheon. And I did move into the next year of my life. But none of those things would make the month zip into eternity.

But here we are, the last weekend of March. Of course there will be a couple of days left as the new week begins, but March has all but gone. At least we’ll be arriving in April during the coming week and we all know that means May flowers are just around the corner.

We still have just a little snow in our back yard behind the house where the sun never shines. Gator Golden loves that little spot. 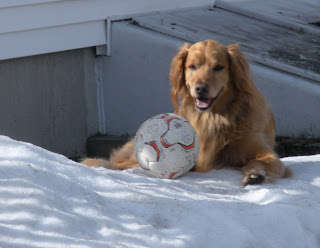 That’s her absolute #1 favorite outdoor toy she’s guarding while cooling off in a little patch of snow.

Oh, oh. Looking at that bulkhead sure does remind me I have a chore to do this spring. I had forgotten about it. Or perhaps hoping it would paint itself.

Gator Daughter and her Golden will be here as is often the situation on Saturdays. She and Gator Wife will spend some time outdoors today and probably get the final bunch of sticks picked up. GW will do most of that while GD ‘entertains’ the two dogs. Both pups will be sleeping very well tonight. 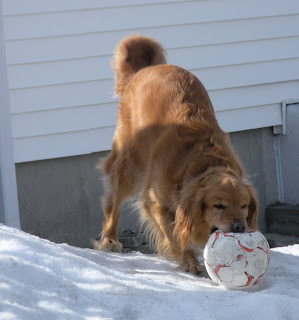 When we first got the ball for GG, we thought it would be folly as there was no way for her to get it in her mouth. That was two years ago. She was holding it in her mouth within 10 minutes of getting it. GD kicks the ball all over the yard and GG would chase it and bring it back as long and often as it would get kicked or tossed. That’ll be the case Saturday, too. The other pup will just sit or stand there and watch the drama taking place.

These three pictures, incidentally, were taken Thursday while the sun was still out. We got some shower activity over night into Friday and the forecast is calling for a veritable deluge Sunday so probably GD and her dog will not visit us Sunday. We’ve learned over the years, of course, that what’s forecast isn’t always what happens. 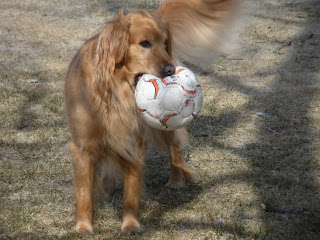 Now with the ball well under control she looks around first to decide where she’s heading. For the next several minutes she’ll prance and parade around the yard. When she’s outdoors, Gator Golden and her ball are never far apart.

This last weekend in March is now in full swing and it’ll bring what it will bring. We hope you enjoy yours as much as we’ll enjoy ours and when the weekend gives way to Monday, we’ll be back for some rantin’ and ravin’.

Thank you for all those wonderful pictures. She certainly knows how to have a good time doesn't she. I guess that kids and dogs are alike when it comes to playing with a ball. We watched a certain young man enjoying a pretty blue ball when he came to visit.
Enjoy your last weekend of the month, and I too advance another year this month. Guess we share something in common,
Mrs, FF

I think they like balls so much because they can have fun playing with them and frequently goad their people to join in on the fun. GG has several but, since she's only allowed the big one outside and never inside, it is her favorite.

And Happy Year Advancement to you!