First of all, The Gator Congregation has voted.  We went to Town Hall Thursday and correctly cast our votes for the upcoming Nov. 6th winners.  I certainly don't want to influence you; so if you would like to know for whom we voted, you can read the list of winner on Nov. 7th.

If you have read this blog over the last several years, you know how I voted on the five referendum questions.  All five had the "No" hole filled in.  Those votes won't necessarily be revealed on Nov. 7th which is why I told you.  I can think of only one bonding question in the last many voting sessions that has been defeated.  Voters simply don't understand that bonds are loans that have to be repaid with interest thus adding to the taxes and debt.

I'd like to give some praise to the three ladies working in the voting room at Scarborough Town Hall when we were there.  They were simply super nice, which is, I think, a requirement for anyone working in Town Hall.  I've never run into anyone there in any department that wasn't helpful and nice.  (I'll exclude management types and councilors here as I haven't done business with them.)

There is one exception to the nice ladies, however.  The one who took our completed ballots refused to hit the button on her computer that would stop all political advertising and robocalls to my home.  She just smiled at my request.  I was joking about her being an exception.  She was as nice as all the rest in Town Hall.

I awoke Thursday with a huge amount of self-pity.  I hurt.  We received a cord of fireplace wood Wednesday and spent a few hours stacking it.  When I saw that fully loaded truck coming down the driveway, I thought, "Holy smoke!  That's a lot of wood!"  The wood guy reminded me that I had bought only 1/2 cords the last two times.  We almost ran out last winter so I went for the full cord this time.

Now for folk that haven't crossed the three-quarter century mark and without a whole heap of physical problems, especially spinal stenosis, a single cord isn't such a challenge.  Of course both my wife and daughter helped, but the lifting, twisting, piling, etc. I did resulted in a very sore back. 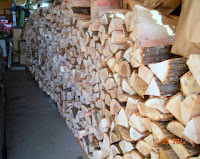 Now, though, the wood has been neatly stacked out of the weather and is ready to save us some money on the oil bill this winter.  There's some of it right over there on the left.

Of course the Golden did her part in helping us.  She picked up little twigs and piled them neatly out back in "her place."

That built in the chair heating pad sure did feel good Thursday morning.

Speaking of political ads, I found it amusing when Angus King had one of a close-up of him saying directly to us that he did not leave a deficit when he left office.  The very next item on the TV station was a Republican ad using a graphic of the Portland Press Herald proclaiming he did leave a deficit and former Governor Baldacci speaking critically of the budget hole left him when he replaced King in the governor's office.

I also find another King ad to be amusing.  It asks who we would rather have as our Senator:  Charlie Summers who he says has been bought by out of state interests to do their bidding or himself but sort of forgets to mention his trips to Washington and New York seeking money.  I wonder if his talking about being bought is from his own experience.

I'm fascinated by the Democrats' consistent pulling out the old "Beware of what the Republicans will do to you" agenda.  For example, do they really think that I, who is a senior, believes that anything that Charlie Summers, just one of 100 Senators if elected, can do that would be worse than the 720 billion dollar cut in Medicare that Pres. Obama has included in his Obamacare?

Another ad that raises questions is the Mike Michaud one that tries to convince us that Kevin Raye will only look to fill his own wallet if elected by pointing out a kitchen Raye allegedly had made in the state Senate office area.  News media fact checking shows the kitchen shown in the ad is totally bogus and that a coffee area, which did cost a few thousand dollars to renovate, is used by all Senators.  I heard that even Michaud has said the picture used was from a photo gallery.

Has Michaud ever explained his taxpayer funded lease of a car, reportedly the most expensive lease of any Congress Critter?  By the way, both the Bangor Daily News and the Lewiston Sun-Journal have endorsed Kevin Raye to represent Maine's Second Congressional District in the House of Representatives.

One ad for President is very poorly edited, I think.  It looks like that Obama ad against Romney, the one featuring the CBS 60 Minutes guy is very obviously edited attempting to get Romney to provide an answer to a question that had been asked earlier.  Maybe the white space was intended to show it was edited.

Campaign ads are interesting.  As are the non-ads.  Why haven't the Democrats helped Cynthia Dill in her campaign for the Senate?  It almost looks like the Democrats have thrown one of their own to the wolves to support someone else.  But then, King has been a Democrat for a very long time, even though he "left" the party to run as an Independent to avoid a primary several years ago.

We're being warned of a rather large storm that might hit us next week.  Or just graze us.  Or, perhaps even miss us.  In any event we should be taking precautions as Hurricane Sandy is, at least, approaching the New England area, possibly a direct hit on Maine.  We will get some nasty weather one way or another and preparation is paramount.

Meanwhile, have a great weekend.