And now the year draws to a close

Now the memories of 2013 begin as the year's final weekend is in full swing.  There are too many good memories of the year to mention them all here, but the year certainly wasn't the worst we've had.

One not so nice thing did happen:  I voluntarily stopped driving.  It's hard to believe that it's been almost a year since Jan. 11th when I had a new heart event and my doctor told me I had to stop driving for six months.  He did give me permission to resume and sent the necessary paperwork to the license bureau, but I still had pictures of "what could have happened" in my head and my wife and I decided to hang up the keys was best and I sold my car.

Gee.  I started out with we had good memories and then immediately broke into the one negative.  That wasn't very nice of me.  One of those good ones was the introduction of our daughter's new puppy into our family.  We were very happy when our older dog totally accepted that new Hellfire, a perpetual motion machine, and that the young and the old coexist rather nicely.

My wife and I are learning that one of the best investments we've made in our home also took place earlier this year when we had a new pellet stove replace our fireplace.  We did get one big enough to generally keep our whole living space comfortable and we have saved "a ton of money" on oil.  The thing is thermostat controlled so we don't have to seemingly continually feed it logs as we did the old fireplace.  The pellet stove is also much more efficient than the fireplace ever was.

Christmas, of course, is over and our Tree is packed away for another year.  Yes, we switched to an artificial tree several years back. That year we took down our last "real" one and discovered its branches were getting very brown where the low voltage lights had been resting.  The needles came off simply by having anyone look at it and we decided it was too close to bursting into flame to try continue to use a real tree. 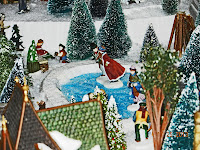 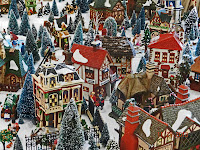 Finally, remember our Village?  We construct a collectable village as our celebration of Christmas.  Here are two scenes, the one on the left is a portion of the main Victorian section and the right one is a skating pond scene designed by our daughter.  The coming week is its final week for this year.  We'll begin disassembling it New Year's Day and have it all boxed and put away for next year by next weekend.

Speaking of New Year's Day, although the day isn't an official beginning to the 2014 state political races and the national Congressional races since they've been underway since the last elections, slowly the political scene will be heating up, if it can get any hotter, between now and Fall.  We can't ignore them and I won't stop believing the "good old days" were better when those races didn't begin until shortly before primaries in September getting ready for November elections.

Now we never seem to elect the persons best representing our positions and honestly conducting our business, either in Augusta or Washington, but rather electing the people on whom special interest groups spend the most money to support their wants.

Jan. 1st is also when most of us really will begin to realize that we've been scammed by the health care issue.  The warnings of the true cost, both in premiums and new taxes, will begin to show their ugly heads.  Have you received your notice of changes in the paycheck taxes beginning Jan. 1?  I have along with probable increases in insurance rates.

I might follow some of the political scene and the effects of the "Affordable" health care act in my ramblings this coming year.  Now, I hope you enjoy the effects of our climate change and global warming.