Edited Thanksgiving PM:  The Village has been completed.  I'll have some final photos here later this weekend.  Now, we return to the original post.

November is a busy month for this Gator Congregation.  The Dad of the family also has been undergoing some health issues which has consumed a lot of time visiting, so far, three doctors and undergoing a series of tests.  I'm not doctor shopping.  The first was to my PCP who scheduled me for tests from two different specialists.  We think the problem has been identified but one final CAT (I think it's really CTA) Scan has been slated.  This septuagenarian stuff isn't an easy ride.

We could have finished our Village 2012 this past weekend if we had wanted to spend just another hour on it.  But football was beginning and the Old Gator does have his priorities.  The Village is a creation using Department 56 structures and accessories including vendors, people, trees and snow from the company's Victorian and Dickens collections.

We start each year on Nov. 11th with a goal of lighting the Village Thanksgiving Weekend.  We will meet our goal this year. 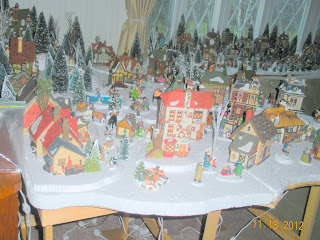 This a look at the main section, completed Sunday, but apparently I didn't have my camera straight or the settings correct.  But it does give you an idea.  Missing are the trees in the front section although you can see then on the mountain in the upper left corner.  Also missing is the skirt we use to hide the underpinnings. 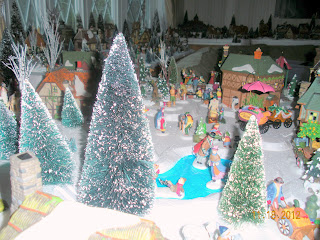 This is looking across the Main's mountain to the front window which houses the Dickens' A Christmas Carol story.  All except that front above have been "treed."  All we have left to do is place trees there and then my wife and daughter will run a skirt about the base.  The final activity before lighting is letting the Department 56 Fresh Fallen Snow fall throughout the Village to complete the Winter Wonderland look.

What's left should take about an hour, perhaps an hour and a half, and we plan to do it Thursday while the pies and turkey are cooking.  We could "light" the Village Thursday afternoon but haven't decided if we'll do it then or follow the schedule and do it this weekend.

Our next post here will be late in the weekend or next Monday morning and we'll give you a small look at the finished product.  In the Meantime, I hope you have a most Happy Thanksgiving.