What a fantastic weekend!

After a couple of very nice summer days, we will probably have another at least beginning today. There is just that ever present chance of a slight shower this afternoon, but the National Weather Service puts that chance at 20% which indicates many areas won’t seen any.

What a superior weekend we just had! It’s been so long since we’ve had such a great couple of days that I almost forgot what they were like. The Gator Clan spent both Saturday and Sunday getting some long needed outside work done.

First, we got the lawn mowed, twice actually, and the clippings cleaned up. It had been so long since we last had a chance to mow that the grass was very high and thick. So I mowed it once without the bagger attached and with the deck a little high. With the bagger attached, I took another ride and cut it to what I call normal and collected all the clippings both from this trip and from the previous one.

The lawn looks wonderful once again. Now if only the weather allows us to keep it that way.

The next task was the making the green stuff, you know, bushes, shrubs, and things like that, look presentable once again. Several bushes in various parts of the yard and the shrubs along the front of the house hadn’t been trimmed since last summer. They looked like this: 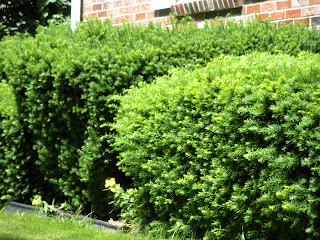 Gator Daughter did the bulk of the work. We have, now had, two shrub trimmers, one battery operated and one electric. The battery one is lighter so is better for high places and places toward the back where she had to reach. The electric one is about 4 inches shorter, but heavier. It is also the more powerful and its motor is about twice as fast as the battery one.

Almost three quarters of the way through, the electric one burned out and will be sent away on the next household collection day. It gave out a loud scream and then the smoke came. It was quickly disconnected from the electrical source. GD finished up with the battery one and when she was finished, those long stubbly bushes looked rather nice: 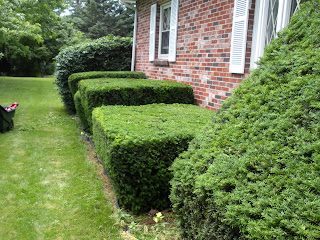 Gator Wife cleaned most of the trimmings and I did what I do best, a lot of heavy supervision. As you’ve read my saying, I don’t do yard work. But I did keep the electric cord where it was supposed to be and changed batteries when one needed charging.

Meanwhile, the two Goldens paraded up and down the yard keeping an eye on things. GD’s dog is nearest us and that’s GG beside her. 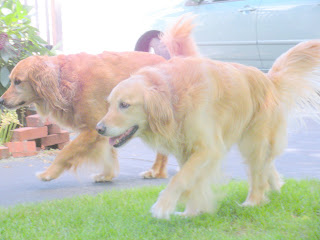 So this past weekend was just a terrific one and I hope your stories are equally as rewarding.