It was a good day even though they plotted against me

It was a fun time yesterday, that dog-sitting business. Thankfully the sun came out and the dogs didn’t seem to need to be around me all the time. Perhaps my totally ignoring them when all they wanted was to be touched had something to do with it. About the only time I didn’t ignore them was when they “asked” to go outside.

And go outside they did. In and out. In and out. All morning long. Mostly out, I’m happy to say. Every few minutes they did need to come in, search the house to see if their women folk were somewhere around here, and finding none headed back out. 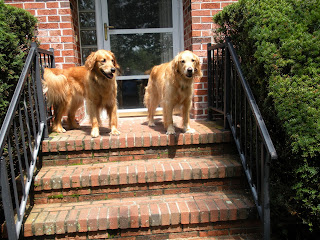 What a beautiful day! Gator Golden (left) and
her sister will enjoy being outside today.
The weather cooperated wonderfully. When the day started out, we had some thunder boomers passing by and just a little rain. Only about a fifteenth of an inch fell from Sunday night into the storm’s end yesterday morning. We had also been told that the sun would only heat up the atmosphere bringing on more storms by noontime.

By noontime the sun continued to stream its increasingly warm temperatures into the yard. Even the humidity fell a little bit. Also by noon, Gator Wife had come home and she took over most of the doggy chores. But GW is one of the women folk and both our little four-legged ladies seem to relate more to her. 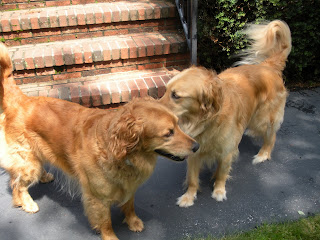 Who says dogs don’t plot? GD’s golden seems to be
making a suggestion in GG’s ear
on how to “get” the old Gator Dude.

She didn’t keep getting up and down to let them in and out like I did. I’d guess both Goldens are just like little girls everywhere, wrapping themselves around guy’s little finger and spoiling him. Or are they the ones that were spoiled and simply know exactly how to have their way with the old man?

Anyway, the experience was not nearly as bad as I had anticipated and I’m willing to take care of Gator Daughter’s Golden anytime. One day here certainly pales to all the days GG has spent at her house.

Now we’re back to reality. I’ll be off shortly to my regular Tuesday senior fitness session. I have a little feeling it won't be a very good day. All that humidity coupled with what I think is my back catching up to the crawling around the basement floor last weekend has taken a little toll. I awoke this morning with an extremely sore back so we'll have to see what happens at senior fitness.

We’ll also have to see how this day develops before we decide to head out for some pricing and perhaps a stop at our favorite little hamburger place in Falmouth.

See? No rants today, either.

I guess the Golden Girls wanted to make sure that you got an extra day of exercise. They are a beautiful pair.
Fnjoy this day of sunshine.
Mrs. FF

I appreciate your noticing the "Girls." They're together quite often, but getting them in a picture mode is difficult. When they see the camera, the head off in opposite directions. Yesterday, though, I think the "plotting" was more important.