By the time Joe Cupo, the chief weather guy on WCSH6 TV, told me it was raining in our area last evening, my unofficial rain gauge had registered six-tenths of an inch and just over an inch by the time I went to bed. It’s higher this morning at 1.85 inches when I arose. Today should see some more showers and drizzle as a front stalls just about on the New Hampshire border. But it’ll be pushed away tonight and the sun should return tomorrow.

Edited 3:15 PM to add: My unofficial rain gauge has now reached 3.00 inches of rain since it started yesterday. The rain continues to fall lightly in my yard. --End edit.

A few weeks ago, I questioned the wisdom of creating regional call centers for 911 calls. I worried about the little extra time and how that would affect lives. We got a look at the potential for that problem over the weekend when a cell phone call went to the wrong county dispatch center.

A house was on fire near the county line. I think the caller contributed to the problem as I think he reported the fire to be in the town of Weld when it was actually in Dixfield. One group looked for the fire but couldn’t find it and when the error was discovered and the Dixfield department finally was dispatched, twenty minutes had passed.

A home had been destroyed by the fire. I can’t say that 20 minute delay caused the destruction and that it wouldn’t have been destroyed even with a quick response. But had there been any people trapped inside that house, those 20 minutes destroyed any chance of rescue.

There was more than one problem with this situation, but I can’t help but wonder if a major part was the unfamiliarity of the location by workers in a call center away from the town. Could a 911 call answered locally have avoided that problem? 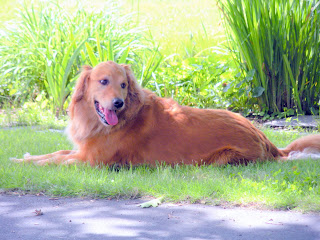 Gator Golden is just patiently waiting for someone to come and pat her.
Driving home from my senior fitness session yesterday morning, I was listening to a discussion on the radio concerning the plethora of petition initiatives we could be facing in November. Some of them are already on the ballot, but there are still several where petitioners are gathering signatures for submission in time for that ballot.

Most are the results of legislative action that has gone against what the various groups think should happen in Maine. Gay marriage, income tax changes, increases in sales tax, and excise tax on vehicles, and school consolidation are among them.

Most of the petitioning groups gathering signatures for what is commonly called a “people’s veto” of enacted legislation say they believe the Legislature went against what most Mainers really want and that legislators are simply out of touch with the regular folk.

The gay marriage law and the “tax reform” which Democrats like to call it passed this year and the petitioners want the voters of the state to decide their fates. The signature gatherers have a very limited time to gather the required number of signers for the repeal efforts to make the November ballot.

That discussion I was listening to yesterday morning was about the number of people’s veto drives underway in the last few years. A tax increase last year was defeated by the people’s veto. The two guys discussing it this morning, the host, Ted Talbot of the show and his guest, who’s name I didn’t get, were saying that voters have the control in whom they elect to office.

I think it was Talbot who pointed out that the majority of voters defend their own legislator believing they would have nothing to do with approving such laws. The other person, who may have been the chairman of the Androscoggin County Republican Committee, said he’d gladly give the voting records of any legislator to anyone asking for them. He indicated the locals’ favorites may not be doing quite what the voters think.

There’s going to be a lot more on all of this as the petition drives near their end and as the November elections approach. I hope all of you will become aware of the issues before heading to the polls. I don’t think many people have an honest understanding of just what the “tax reform” law truly holds for their personal finances.